Most Outings Amount To Only A Piece Of A Post 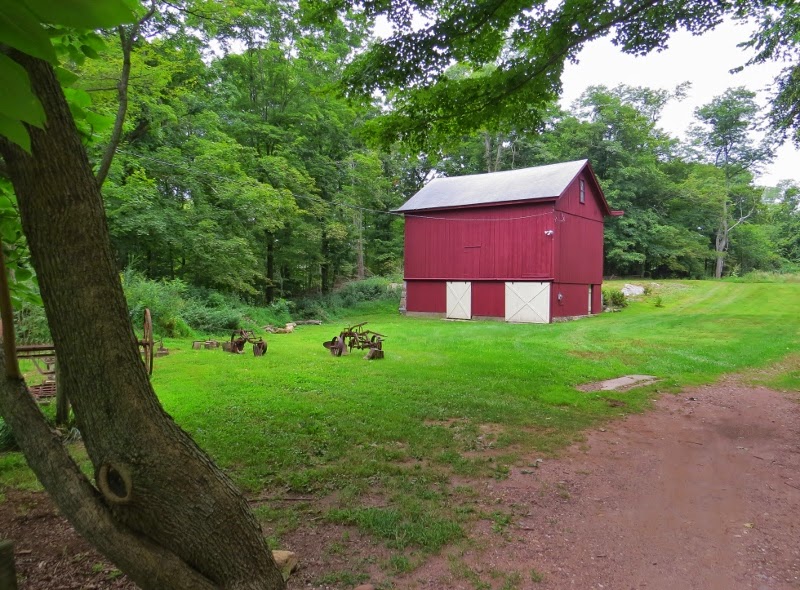 I decided a long time ago that a reasonable goal would be to average one post a week but even that can be a challenge for me sometimes. I usually need something to inspire me like a good bird photo, a particular thought or idea I want to express, a great day of birding, or exploring an interesting new place are a few possibilities that might do the trick. Unfortunately, there are times when I don't get decent photos, don't see many birds, or my outing turns out to be ho-hum. Not bad, just not enough to motivate me to post something.

That red barn is at the parking lot of the Taylor/Palmer preserve by the way. Nice trails, but I didn't see much in the way of birds on that particular afternoon. 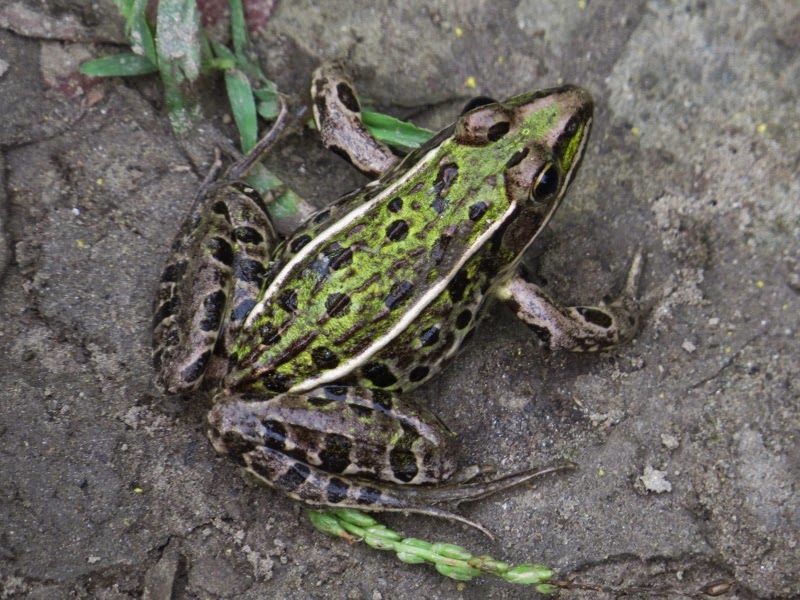 I saw this frog (Leopard frog?) over by the fairgrounds one morning. I also found a Marsh Wren there that day which was a bonus. 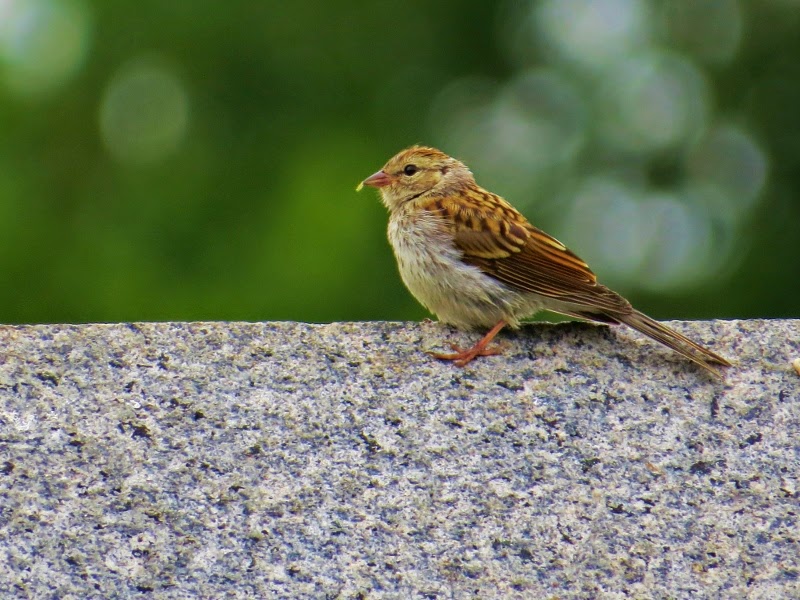 I like reading gravestones from old cemeteries. I was surprised at the number of graves from the 1700's that I found at Center Cemetery. One of the things I noticed was that a lot of people died at a young age back then. I often find  Chipping Sparrows and other birds using  gravestone as a perch in cemeteries. 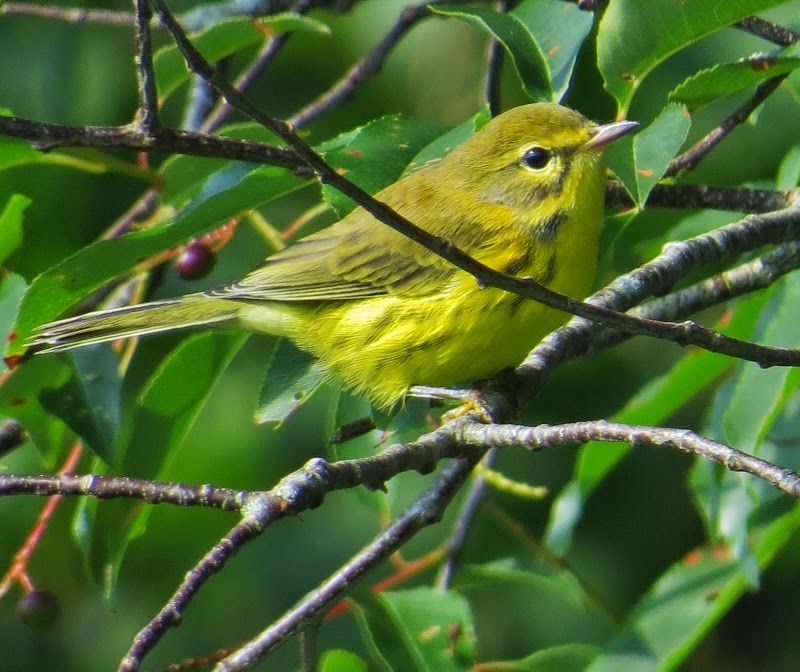 Early one morning in July I visited a place called Bear Hill Wildlife Management area. There were lots of Field Sparrows, Indigo Buntings, and White-eyed Vireos that day. I managed to get a photo of a Prairie Warbler. 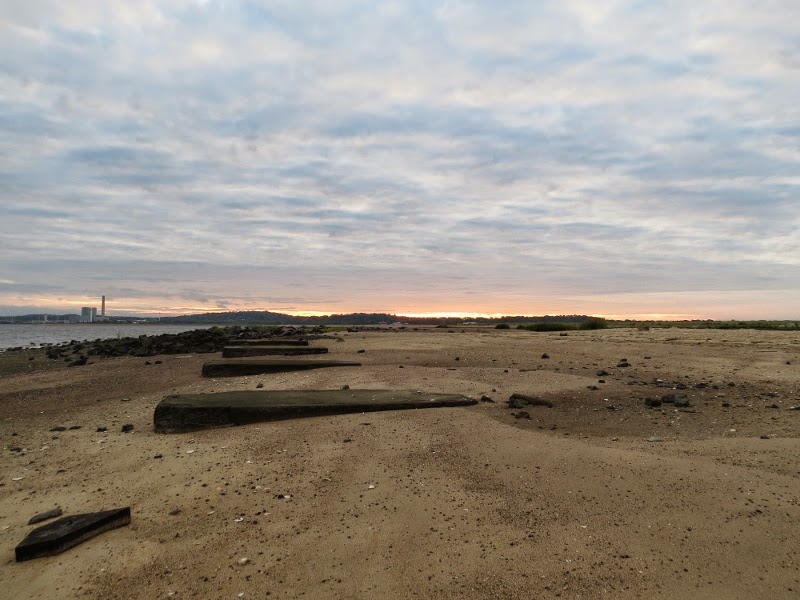 I made a trip down to Sandy Point In West Haven. I took some photos of shorebirds but they were too grainy to use. Nice morning but I was a little too early for the incoming tide. 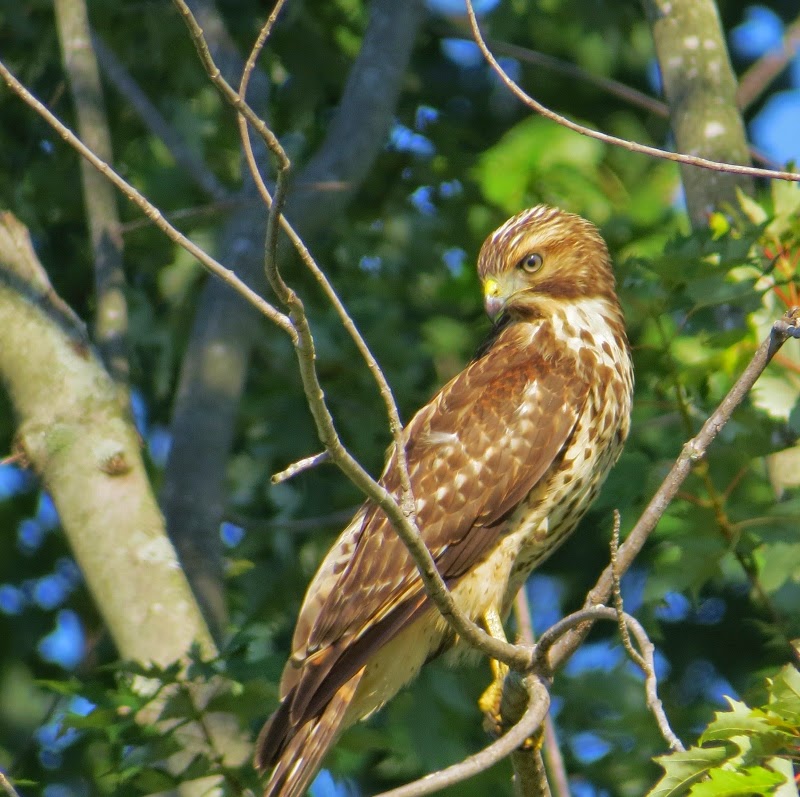 I came across this hawk somewhere along the Connecticut River in Portland. Maybe a young Broad-winged or Red-shouldered Hawk? 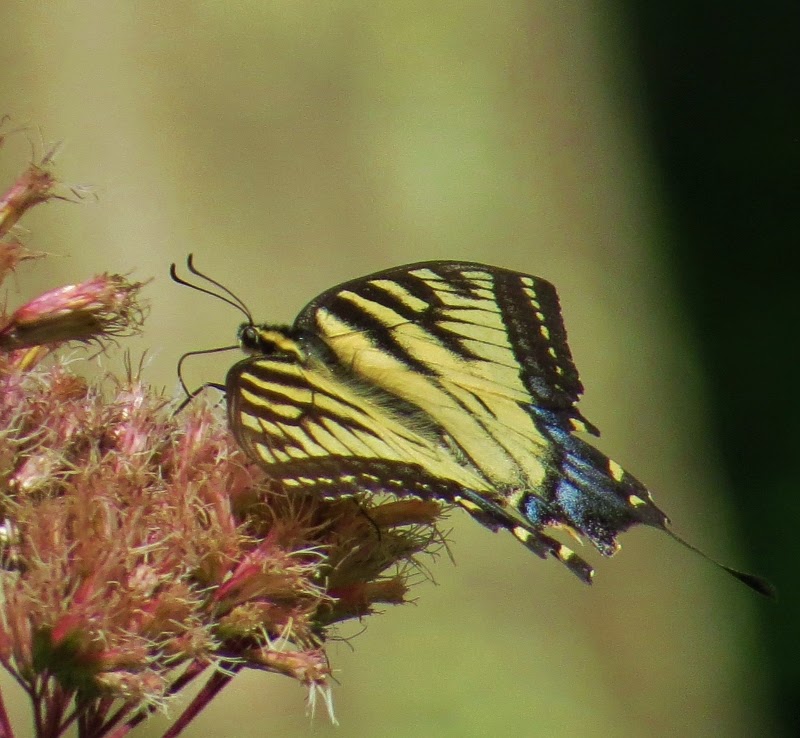 I've been seeing more butterflies around this month but I haven't been able to get close to them. I took this photo of a Tiger Swallowtail from about 15 feet away. The Zoom they have these days is amazing.

All of the photos in this post were taken on different days. Many times my birding day seems to equal a piece of a post that falls a little short of what I'm looking for.

Blogging is an outlet for creative expression or to share something of interest. Sometimes I draw a blank but try to post something. Blogging is like exercising. If you get out of the habit of doing it then you might end up quitting all together.  I've got to keep things going to reach my 10th year of blogging in 2014!

There is an old poem that I think of sometimes when I'm stuck.
It's titled "When Thomas Takes His pen" by Elsie Hill. It can be found by clicking the link to the following link on HistoryProfessor.Org (Maintained by Zachary M. Schrag):   http://historyprofessor.org/miscellaneous/when-thomas-takes-his-pen/

10 Things It Takes To Be A Birding Explorer 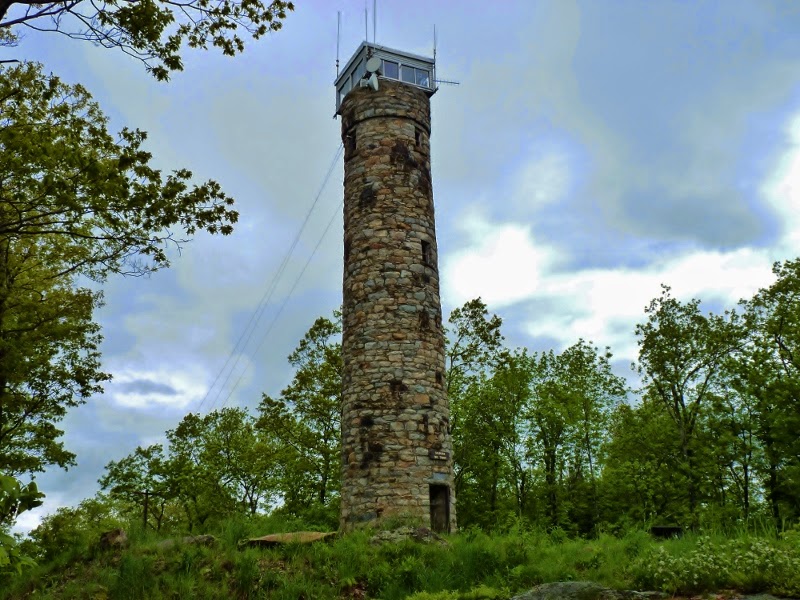 As someone who does a lot of birding on the weekends I find that it's often more comfortable to visit a place that has already been established as a productive birding spot. You only have so much free time and if you take a chance on a new spot you might end up in a dead zone where you don't see many birds. On the other hand,  taking a chance might break you out of your normal birding routine and turn into an exciting morning of discovery.

When I read daily bird reports or listings on E-bird it isn't the reports of rare birds from the well-known birding hotspots that catch my attention (unless it's a species that I specifically want to see). I'm most drawn to reports of interesting bird sightings from obscure places. People who make a habit out of looking for birds in unestablished places are what I call "birding explorers". I'm not referring to birders who take trips to places like South America. I'm talking about those who like to explore new places within driving distance of their home.

Here are 10 thoughts on what it takes to be a birding explorer:

1)Research:There are many choices on how you can go about searching for new places to check out. Here are a few ideas:

Of course, the possibilities are almost endless.

2)Curiosity: In order to have the drive to try new places you need to have a sense of curiosity as to what this new place might be like.
3)Imagination: When I went hiking as a kid my imagined coming across all sorts of things once I started hiking a new trail-bears, American Indians, gold-anything was possible in my book! I don't have the same sort of imagination now but I still dream about finding a rare or unexpected bird.
4)Spontaneity: Sometimes I come across an unfamiliar trail during my travels that might not even be marked in some cases. Once in  a while I just hop on the trail and see where it leads.
5)Caution:Naturally you don't want to end up lost or injured so you do need take proper precautions-cell phone, water, and a brightly colored orange vest if your in a hunting area.
6)Faith: It's important to believe that you're going to find something worthwhile or you may become discouraged before you even start. 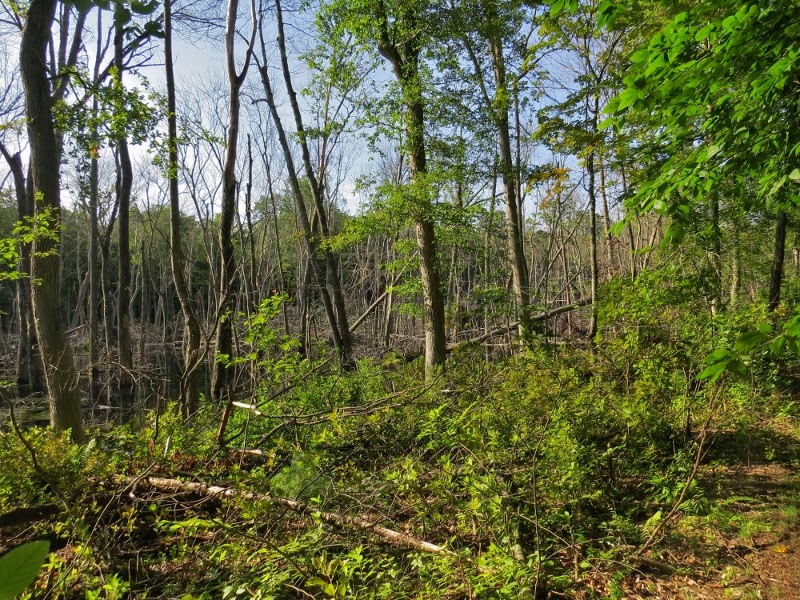 7)Patience: I thought this hidden swamp looked promising but I didn't see much of anything there at first. On the way back out I stopped again and the place was alive with birds like
Great Blue Herons, Green Herons, Wood Ducks, waxwings, Brown Creepers, vireos, swallows, warblers, and flycatchers. Birds don't always reveal themselves at first glance. It pays to be patient sometimes. 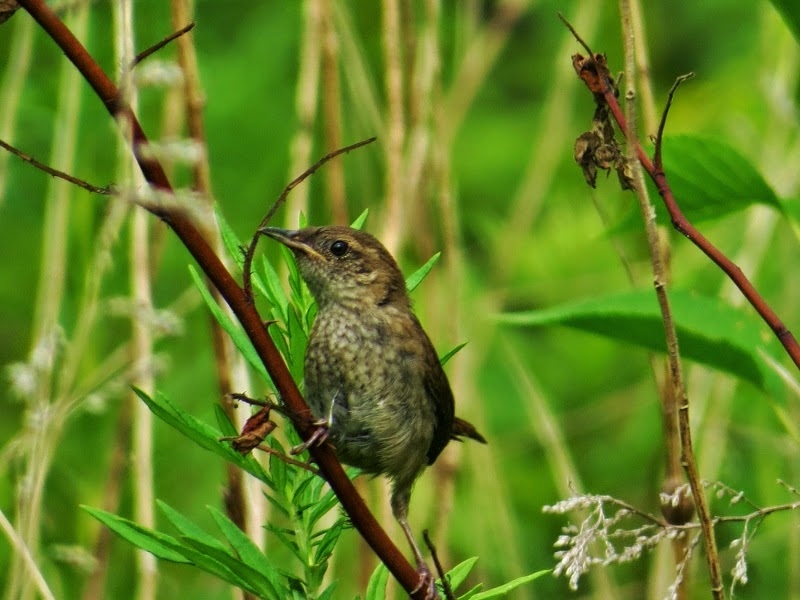 8)Flexible Expectations: You're not always going to find that Ivory-billed Woodpecker you're looking for.You might have to settle for cool butterflies, a deer sighting or maybe just a plain old House Wren. Every circumstance is different and you have to appreciate the hand you're dealt.
9)Resilience: Sometimes you might feel like your efforts were totally unproductive. You have to shake it off and believe that next time will be different.
10)Commitment: It's easy to fall back into the same old routine so it takes a commitment if you are serious about trying new places.

It may be easier to stick with places that you already know but it is more rewarding to find a hidden gem that you never knew existed.
Posted by Larry at 7:58:00 PM 2 comments: 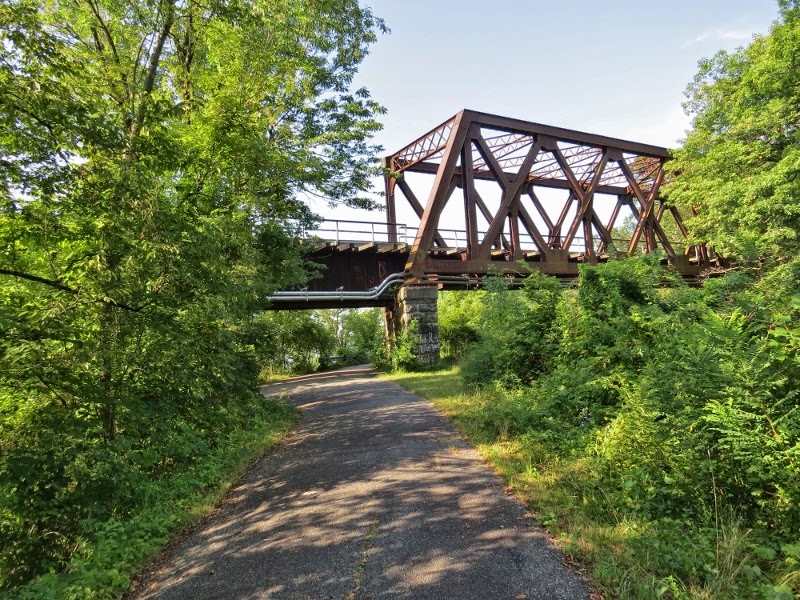 I always thought that Windsor Locks was an odd name for a town when I was a kid. Later I learned that it was name for a set of canal locks that were built in the 1820's to help ships get by the shallow rapids in that area of the Connecticut River. Animals such as mules used to freight barges by rope along the man-made canal. It's been tarred over and is now used as a recreational trail for pedestrians and bikers. 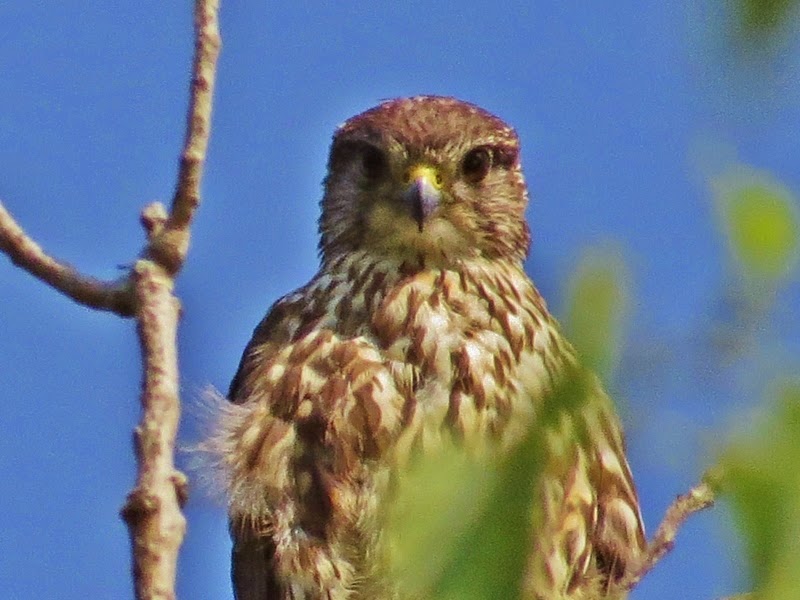 This was the first time I ever visited the canal trail. It was the DEEP description that mentioned wildlife that lured me there. I found this Merlin about a mile into the 4.5 mile long trail. 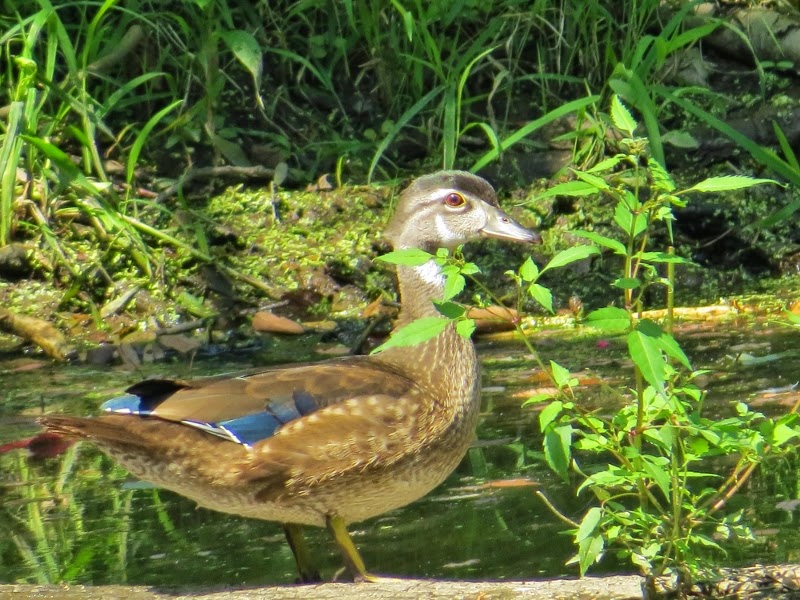 I found a non-breeding male Wood Duck standing on a fallen tree. It looks so strange compared to the breeding males that I'm more familiar with. 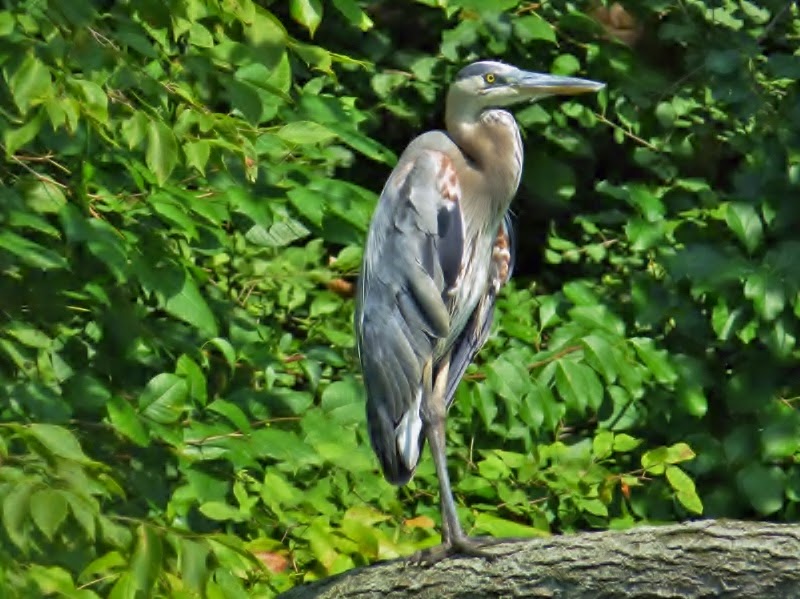 I passed by 3 Great Blue Herons and several snapping turtles during my walk. 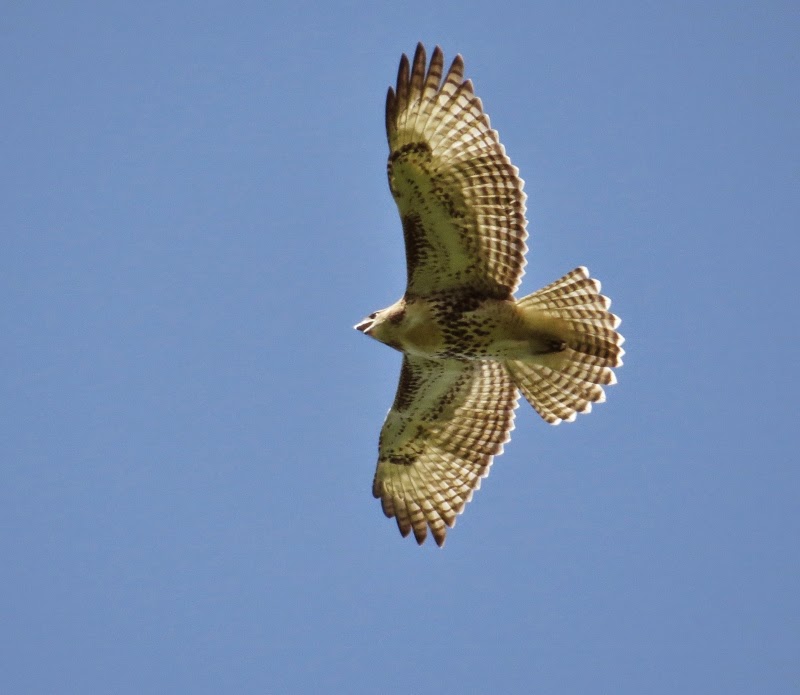 I also saw a few Osprey, Bald Eagles, and this Red-tailed Hawk flying overhead. I also saw a mix of other birds including a few warblers,vireos, and flycatchers.

I only had time to walk 2 miles of the trail but I'm looking forward to returning with my bike next time. A 9 mile round trip seems a bit too long for walking.
Posted by Larry at 9:31:00 PM No comments: