Christmas Birds At The Power Lines 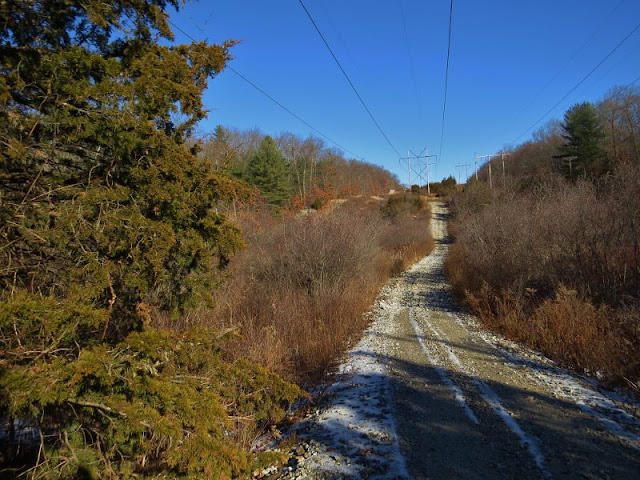 There are many people who don't like power lines mostly because of the electromagnetic radiation they produce and the land that has to be cleared below the lines. That being said, power line cuts are often productive places to find birds. 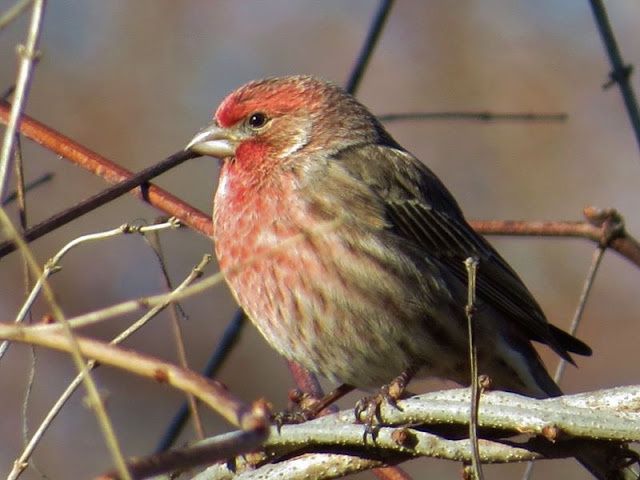 On Christmas morning I took a walk along the power line cut crossing at East Cotton Hill road in Portland. I encountered a number of sparrows, wrens, cardinals and finches that were eating a variety of seeds and berries (male House Finch pictured above). 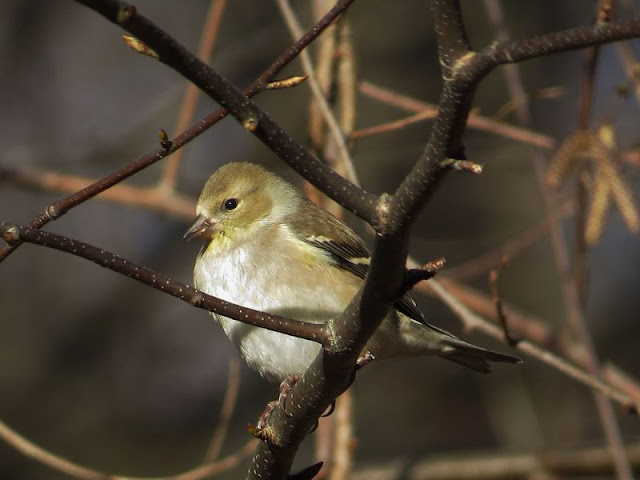 Gold Finches aren't quite as colorful during the winter as they are in the summer but I'm always encouraged when I hear their whiny call that sound to me like "eaaaat". 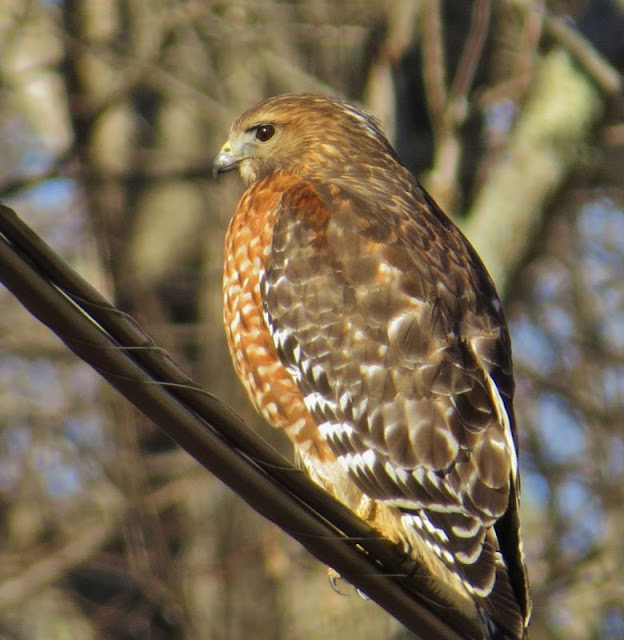 This Red-shouldered Hawk preferred perching on the smaller lines along the roadside. 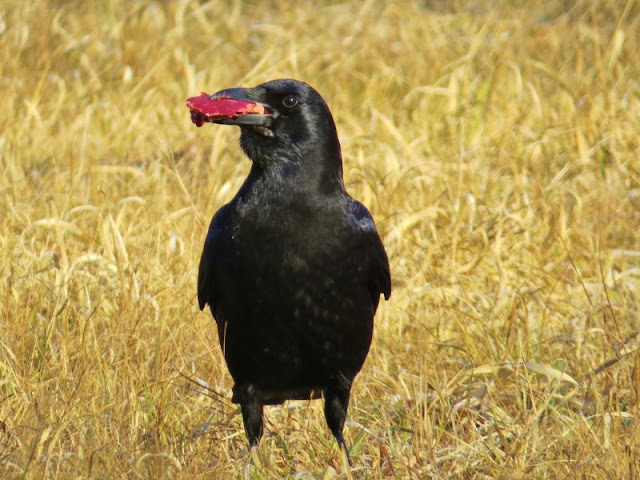 The habitat can vary quite a bit as there is at power line crossings as you venture out toward the edges. It looks as though this crow of black has found its Christmas snack!

Merry Christmas and happy holidays to all!
Posted by Larry at 12:10:00 PM 4 comments: 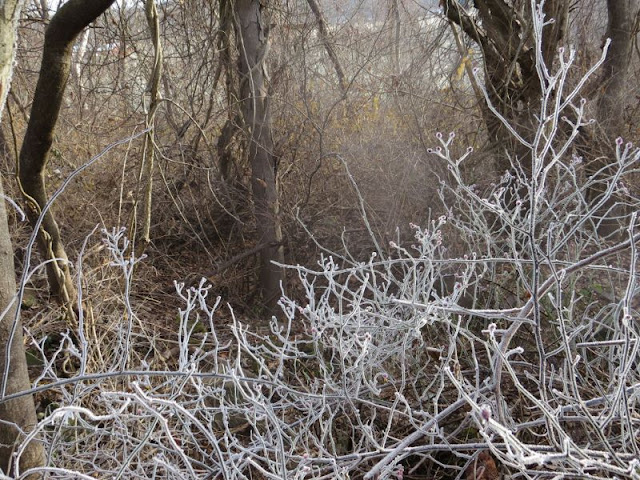 I usually like to have some sort of plan or theme in mind when I'm heading out on my weekend birding excursions. Occasionally I start out full of enthusiasm and then it suddenly feels as though I've blown a motivational fuse.Whatever great ideas I had don't live up to my expectations and I feel like calling it a day before I even get started.When I'm feeling that way I know it's time for a break. I might skip a day I would normally go birding or keep thing as quick and simple as possible.

I was feeling that way this week as we've had cold weather and snow set in so I decided to visit the river and brownstone quarries area within walking distance of where I live- (link to hog river journal article about quarries by Doe Boyle) . The tangled mess in the top photo is near a trail that passes along a slag pile where the unused brownstone used to get dumped from the nearby quarries. There are pockets and caves formed by the old brownstone pieces under the trails and you can see steam rising from the ground on cool mornings.
click to play 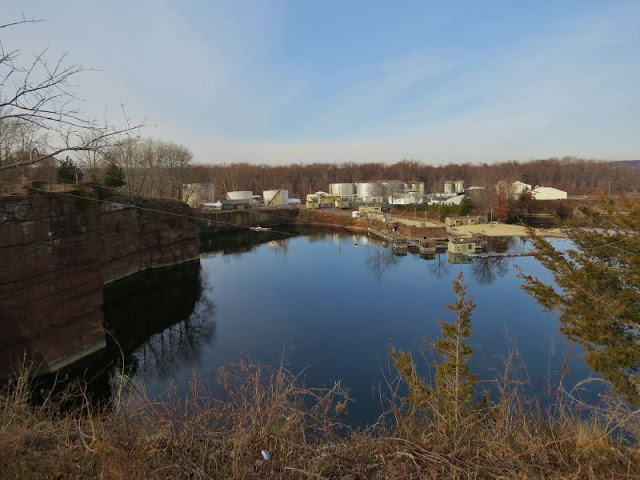 Here's a view of one of the quarries looking toward the Connecticut River which is just beyond the tanks in the background. The water in the quarry is about 100 feet deep in some areas. It is currently being used as a water park. As you can probably tell from the photos I didn't encounter a lot of birds during my walk. A few sparrows along with the usual suspects. 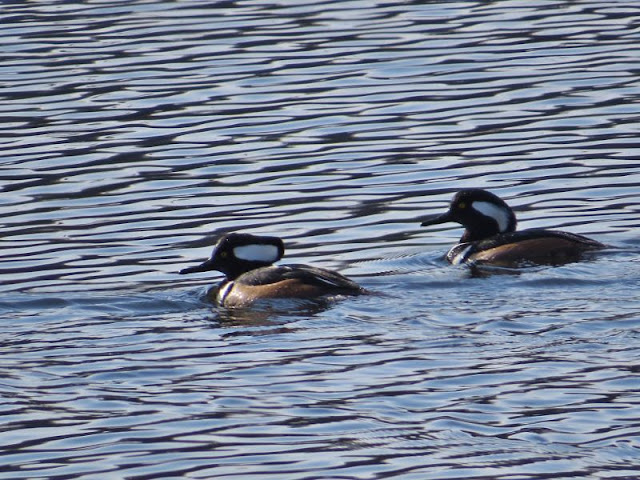 When I reached the river I was happy to see my first two town hoodies and since I was wearing a hoodie at the time I felt like we sort of bonded. It would have been nice if the sun was on my side of the river but that's okay. At least I got out there and even managed enough energy to post something. This weekend I've got a Christmas count coming up so there's no need for me to come up with a plan.
Posted by Larry at 8:12:00 AM 1 comment: 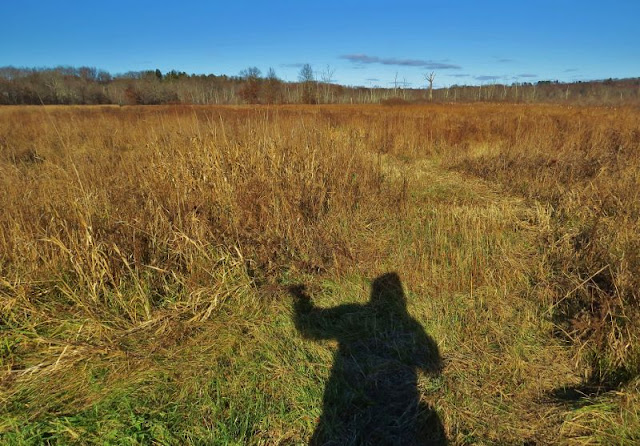 Dead Man's Swamp is about a 500 acre area that is situated along the Connecticut River in Cromwell. It used to be the favorite birding patch for a local birder named Dave. He was known for his great skill in finding birds by ear. He could not only identify a species by its song but also the key it was singing in and its date of birth.He insisted on carrying around cheap, beat up binoculars while every other birder felt the need for Swarovski or Leicas.

I'm not sure why the area is called Dead Man's Swamp. I heard one story that many years ago a couple of hobos tried to hitch a ride on the nearby train bordering the swamp. One of them had his hand severed at the wrist as he was reaching out to grab a bottle of whiskey from his traveling companion. He then fell off the train and into the swamp. The hand was supposedly found in the swamp still holding on to that bottle of whiskey but the rest of the body was never recovered.

There have been stories that people have seen a shadowy figure wandering the fields. It is supposedly the ghost of the victim searching for his lost hand. I couldn't find any evidence of any truth to this story on google so it's probably just a local campfire tale. I'm not about running into the ghost but the place is heavily hunted and I don't like the thought of being pelted with bird shot. 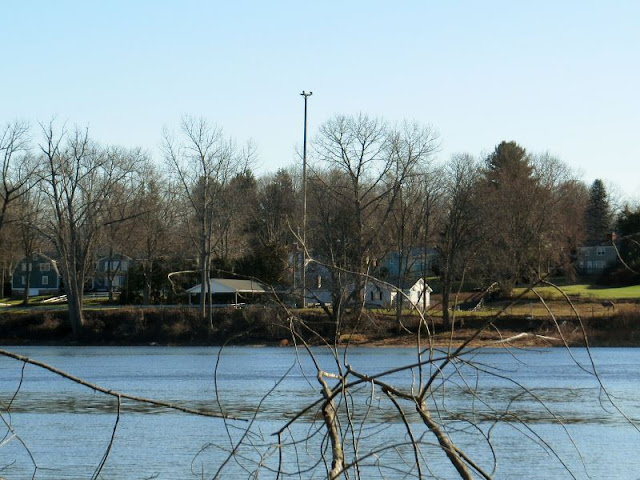 It seems like every time I go to the Cromwell side of the river I see something interesting across the river in Portland. The last time I was here there were White-winged Scoters on the opposite side. This time it was a pair of adult Bald Eagles. If you look closely  you may be able to see them on a platform which is mounted on top of a very tall pole. 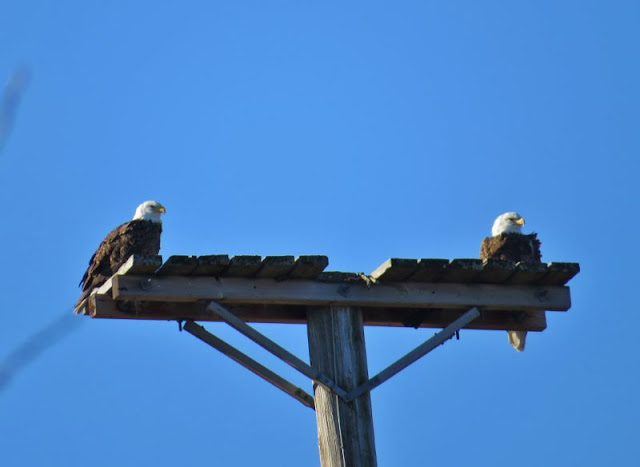 I took a ride across the river to get a closer look. It seems they were still there waiting for me to return to my hometown.
Posted by Larry at 12:08:00 PM 1 comment: 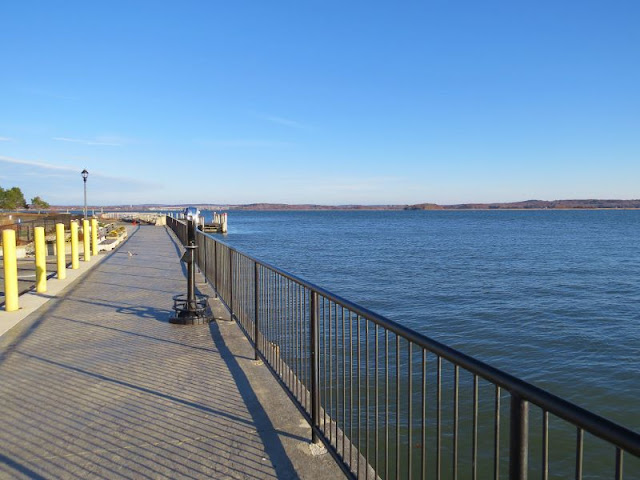 I stop and check Saybrook Point several times during the winter. It's a good place to find winter ducks and loons. 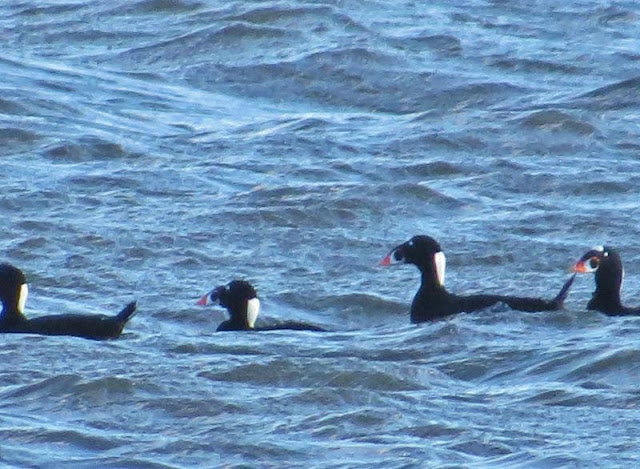 I found it amusing to learn that Surf Scoters have the nickname skunk-headed coots. There were about 30 of them there along with several Ruddy Ducks.
Posted by Larry at 11:28:00 AM 1 comment: