Did You Know That Porcupines Climb Trees? 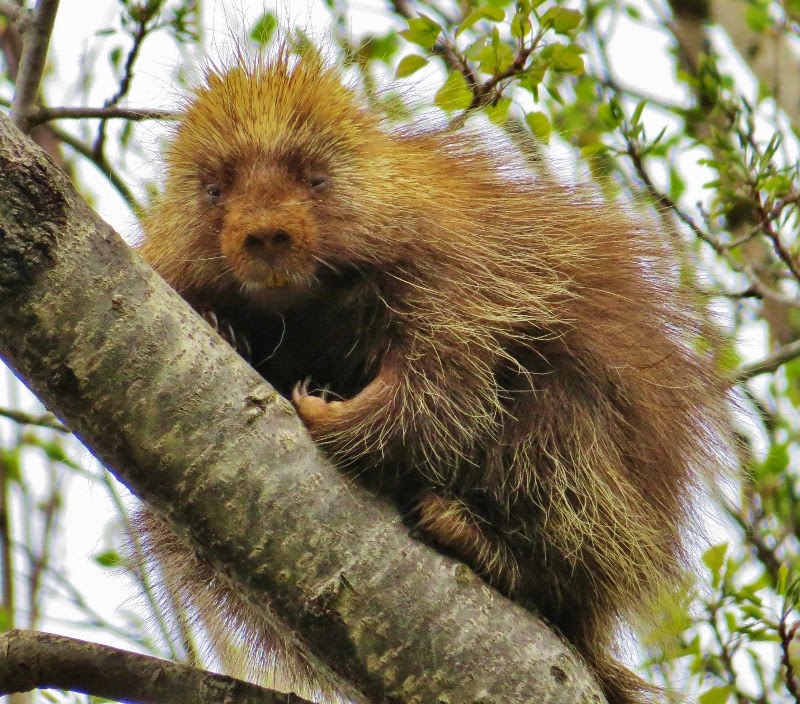 About 10 years ago I was wandering around a logging road in a remote area of northern Maine with my cousin. We were looking up at a very tall, dead, tree and saw a strange looking creature in the process of climbing towards the top. At the time, we were baffled as to what it might be. We considered that it might be a porcupine but didn't know that they could climb trees. We thought porcupines were like woodchucks with sharp quills moving around slowly only on the ground.The animal we saw had its body extended and looked almost like a primate the way it climbed. We consulted with the owner of the fishing lodge and he informed us that porcupines are rodents capable of  swimming and are also excellent tree climbers.

During a recent trip to northern new Hampshire I had my second encounter with a porcupine. I was talking to one of the locals about my sighting and he told me that they are herbivores and that they like to chew on tree bark. He said that a porcupine once chewed up his boat paddle.You never know for sure if these local stories told to us "flatlanders" are true but they are entertaining either way. North American Porcupines are interesting creatures that make a variety of unusual vocal sounds. Follow this NatureWorks link on porcupines to learn more about them. 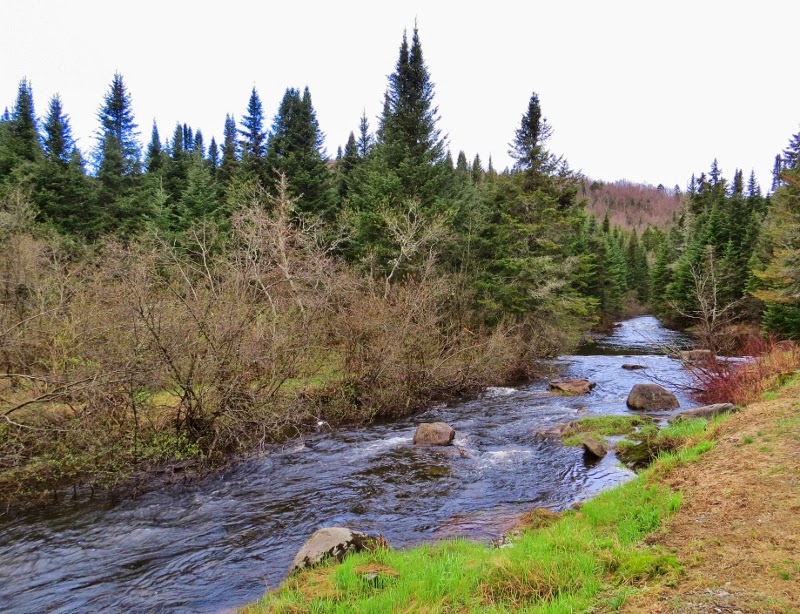 We found him along Indian Stream road in the state forest along with dozens of warblers including: Black-throated Green, Black-throated Blue, Northern Parula, Magnolia, Blackburnian, and  Canada Warblers. 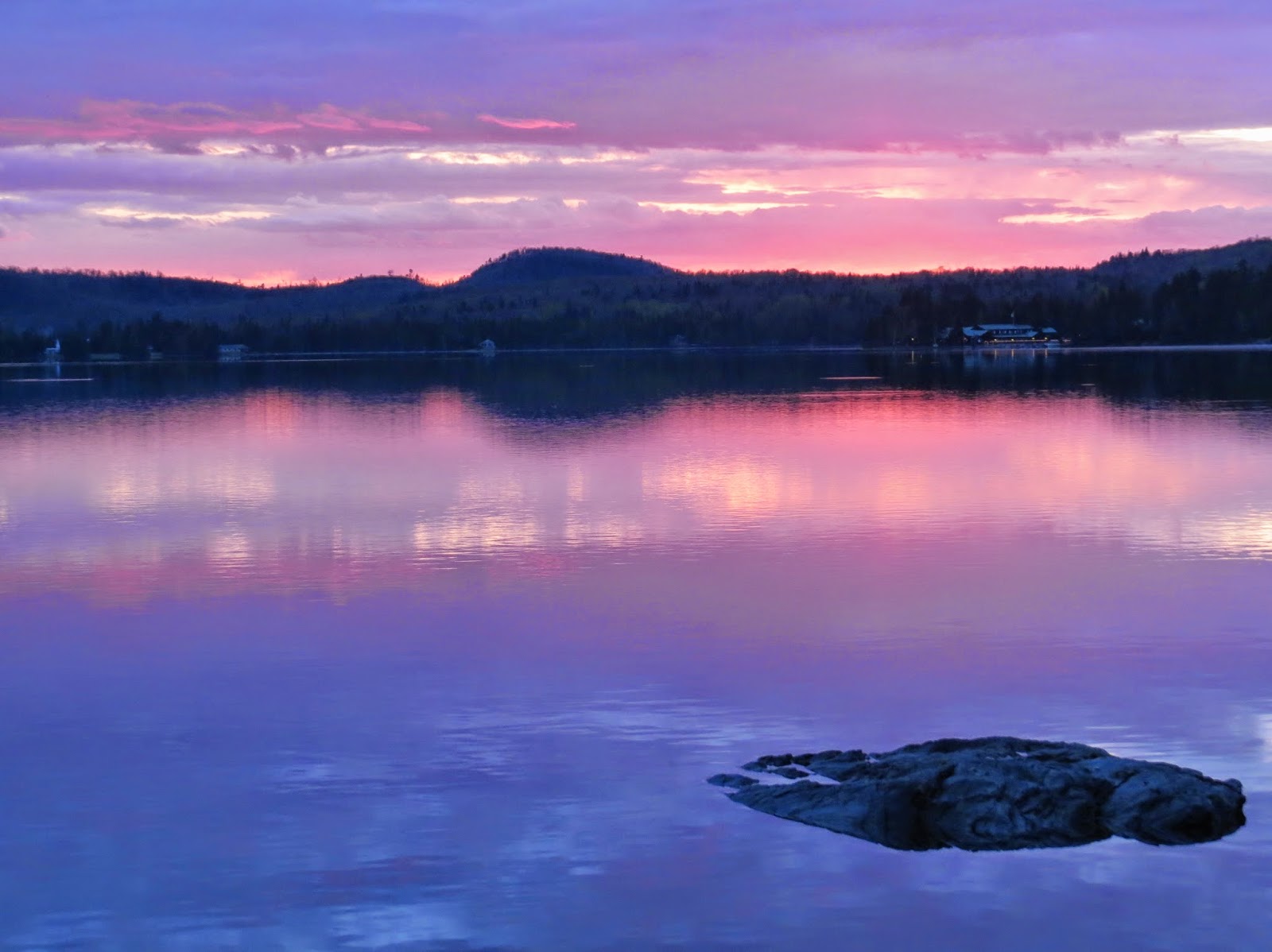 We stayed on Back Lake in Pittsburg. The sunset views were gorgeous and I managed to get my first look at a Black-backed Woodpecker during a walk along one of the roads near the shoreline. No picture to show for it though so it's not going on my life list yet. 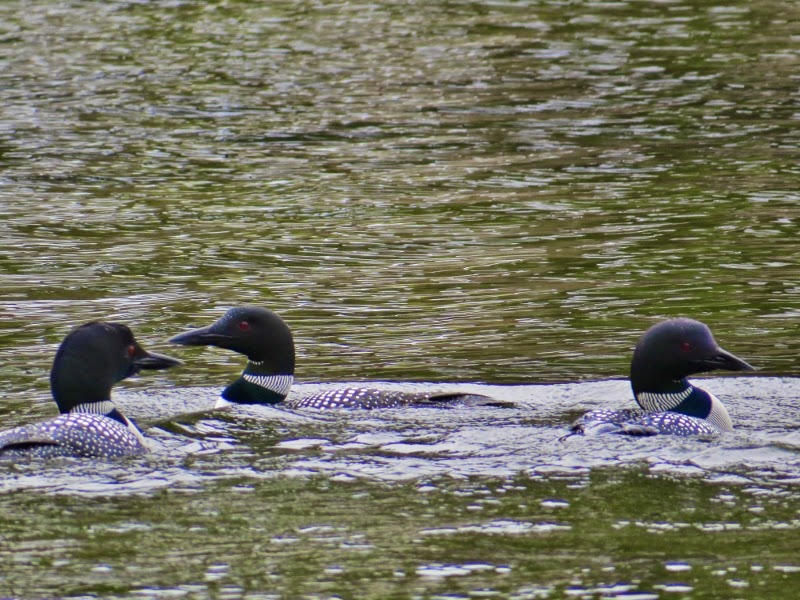 There were 3 pair of loons on the lake but they only seemed to come close when it was cloudy out. 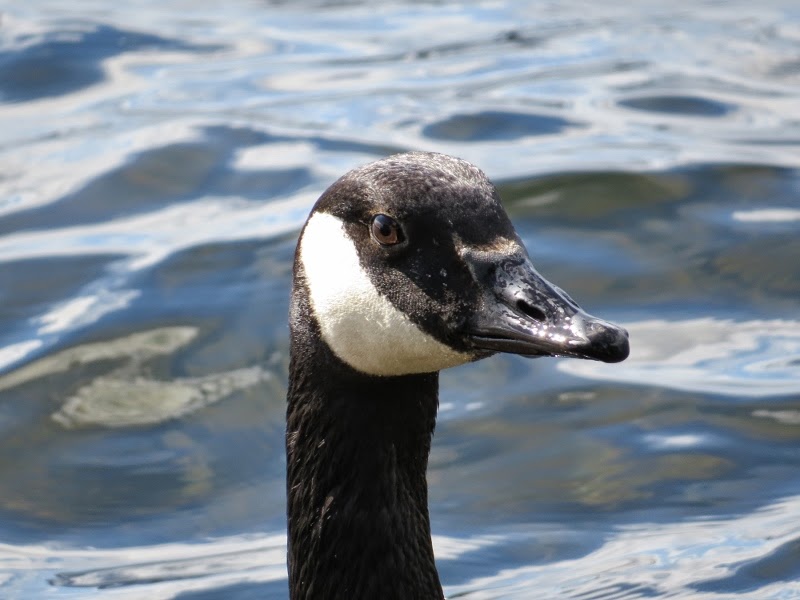 I was hoping they would follow the example of the Canada Goose and pose for me. Northern New Hampshire is one of my favorite areas in new England so I'm sure I'll return to visit the loons again in the future.
Posted by Larry at 1:07:00 PM No comments:

10 Reasons Why Warblers Are Overrated 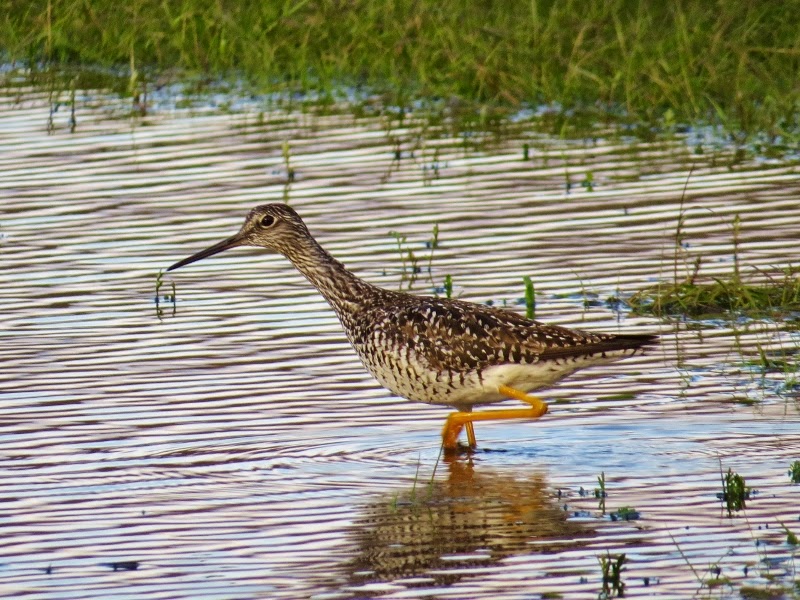 I recently found some yellowlegs feeding in a puddle at the fairgrounds and remembered my enthusiasm at seeing one for the first time years ago. I was new to birding at the time and some of the veteran birders who were there assured me that if I was impressed with a yellowlegs I would surely be ecstatic when if I was able to see some warblers. I was reminded about how great warblers are during my first year of birding.

When I finally started getting my first look at some warblers I thought they were great! Then I soon realized that all the new species I had seen along the way were just as great. My expectations of warblers had been built up so high that the reality of seeing them couldn't possibly compete.

10 reasons why warblers (and warbler watching) are overrated: 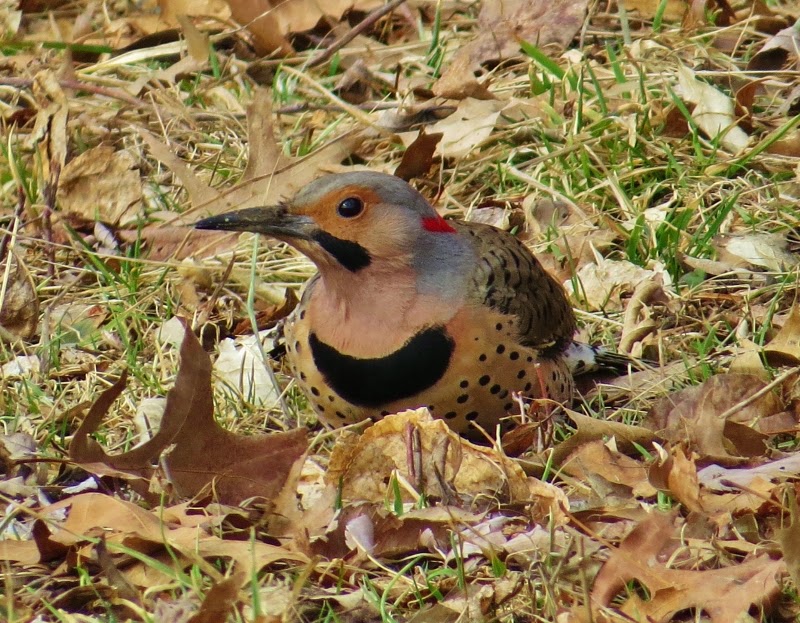 1:They're too small: Most other species like this Northern Flicker are larger making them easier to see.
2: Many warblers spend too much time up high in the trees: I find it unpleasant to be looking high up in leafy trees for birds. It can be tiring and uncomfortable which leas me to number 3.
3: Warbler neck: I was so eager to find warblers the first couple of years that I developed what they call warbler neck from looking upwards to much. My hands were tingling from pinched nerves for a few weeks at one point.
4: They move around too much: It's difficult enough to look high up into leafy trees for these tiny birds but then they don't have the decency to stay still.The nerve of them!
5: Warblers difficult to point out to other birders, especially new ones: "It's over there in the top of the deciduous tree behind the dead branch at 1 o'clock! No now it moved to the cedar 2 feet from the top on the left side! Oh forget it-it's flown way back into the woods." You'll hear lots of these types of conversations while warbler watching with a group and it can be especially frustrating for new birders. 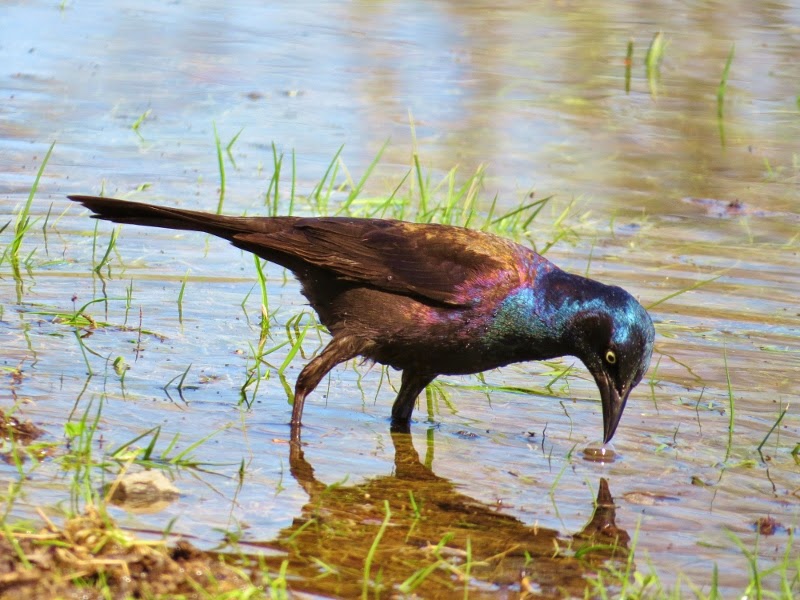 6:They're not the only species that have colorful markings: It is true that some warblers have some really eye-catching markings but the same can be said of many other bird species. Even a grackle shows of some nice color if you catch one in the sun. "Do you see it?  That foot long bird standing still in a puddle blowing a bubble."
So much easier to find! 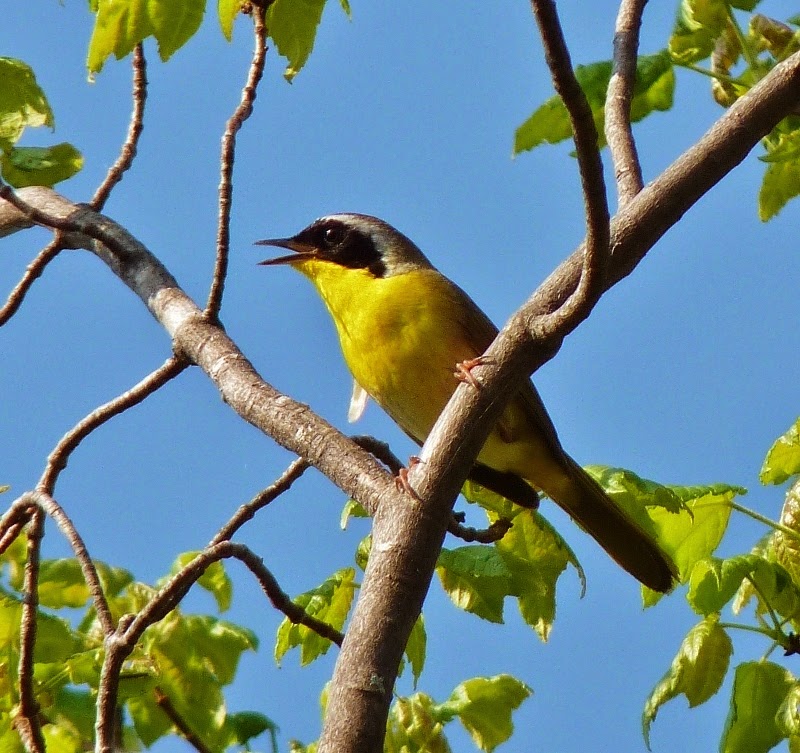 8: Warblers think they're better than the other birds: I can't prove this. It's just an inkling I have. They come across a little bit cocky when warblers like this Common Yellowthroat are belting out a song from the top of a tree branch.
9:There are other species that sing better than warblers: For example, I prefer the flute-like song of a Wood Thrush to any warbler song.
10: I have a hard time photographing them: If I had captured some nice warbler photos this Spring I might not have written this post!

Seriously, I look forward to the return of warblers each Spring and especially love it when I get a great view of something like the  stunning Blackburnian Warbler. All I'm saying is let's not forget all the other great birds out there!

Blue-gray Gnatcatcher Caught On The Nest 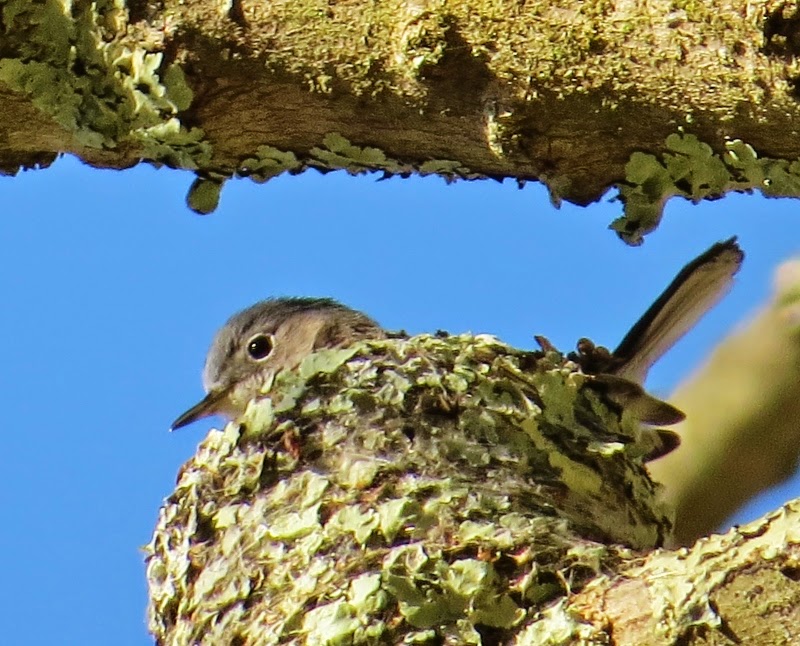 I've been hearing Blue-gray Gnatcatchers around our woods for the last month or so. They tend to stay higher in the trees so it can be hard to get a good look at them.They have a pointy little bill, white outer tail feathers.They aren't particularly colorful. Adults have a mostly grayish back, are white underneath and have a distinct eye ring. Their song sounds like tiny squeaks as though a baby mouse was flying around in the trees.They eat mostly insects and spiders. I think the most interesting thing about these birds is their nests.They use spiderwebs and lichens to construct a nest that looks like a knot in the tree. I found this gnatcatcher on its nest in Meshomasic forest in Portland while I was sitting down to take a break.
Posted by Larry at 11:48:00 PM 4 comments: