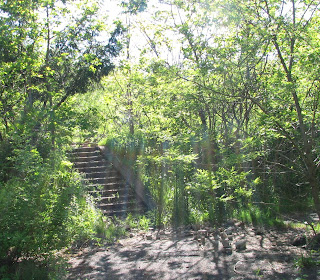 I spent the morning rambling around Meshomasic State Forest looking for birds on Sunday. I usually check the area surrounding the reservoir, Del Reeves Pond, or hike to the top of Great Hill. Beyond that, it's any one's guess since the forest isn't organized in any formal manner. There a few dirt roads that lead you through the woods and there's also lots of trails, many of which are unmarked. It is popular among off road bikers and hikers but there are no camping or picnic areas. You definitely need a map to find your way around if you're not familiar with the area.
--
I found an abandoned road with several collapsed structures , an old metal tank and a stairway leading to nowhere. I learned that it had been the old battery area for a Nike missile site which closed down in 1965. In the early 80's it became Camp Meshomasic where the Youth Conservation Corp performed much of the same type of work that the Civilian Conservation Corp did in the 1930's and 40's. 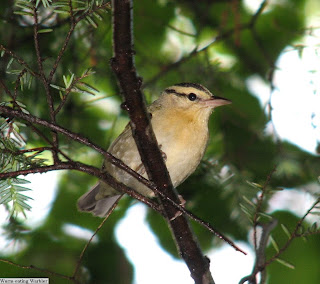 I found that this abandoned road provided a good viewing angle to see birds as it rose in elevation. I had a nice view of a Worm-eating Warbler on my way up but this particular photo of one was taken last summer in the Maromas section of Middletown. 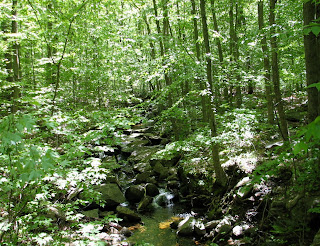 Meshomasic was the first State Forest in New England and the second in the country. It is mostly second growth forest but does have a stand of large White pines that are over 100 years old. The word meshomasic is an Native American word meaning place of many snakes. It has a native population of Timber Rattlesnakes but I've only seen one on a couple of occasions.
-
I drove slowly along the dirt roads carefully searching the edge of the woods and along the stream beds. It can be difficult trying to see birds in the thicker parts of the forest but the woods are filled with singing birds this time of the year. I heard several species of warbler including Black-throated Blue, Black-throated Green, Black and White, Northern Parula, and Pine. I also had good views of Magnolia, Ovenbird, Prairie, American Redstart, and Yellow Warblers. Baltimore Orioles, Scarlet Tanagers, Veerys, and Wood Thrushes were plentiful. 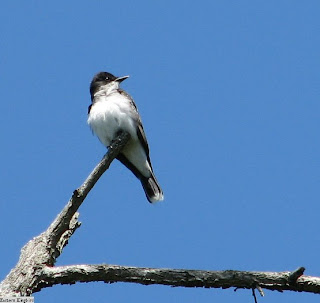 There were a few flycatchers around including Eastern Wood-Peewe, Great-crested, Eastern Phoebe, and Eastern Kingbird. I like the clean cut appearance of the kingbird with its black back sharply contrasting with the white belly and white tipped tail. 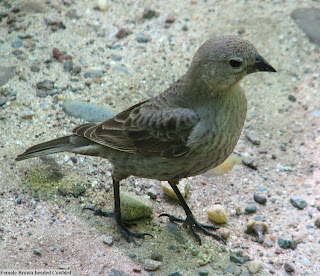 The female Brown-headed Cowbird is a drab looking bird and it doesn't even have a brown head, only the male does. This female cowbird walked right up to me as I was sitting on a stump on the side of the road. I figured if I was ever going to take a photo of a female cowbird, it might as well be now.
-
Meshomasic Forest doesn't seem to get much attention from Connecticut birders. I'm looking forward to exploring it more thoroughly this summer since it's only a few miles from my house. Not only does it have good birding potential but it's also full of mystery and history.
Posted by Larry at 6:26:00 PM 17 comments: 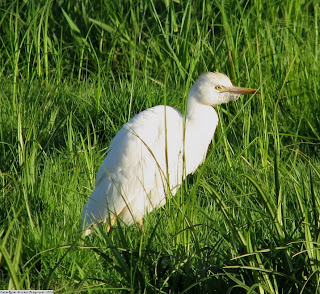 Mark Twain once said: "If you don't like the weather in new England, just wait a few minutes. Last weekend I was watching warblers in 80 degree weather. This weekend we had rain, temperatures in the 50's, and 40 mile per hour winds. I thought that it might be difficult to search for warblers on such a windy morning so I decided to see what sort of birds might be lurking in the fields at Portland Fairgrounds. To my surprise, there was a Cattle Egret patrolling the grassy area near the skating pond. Cattle Egrets are white with a yellowish bill like a Great Egret but are much shorter and stockier.

click to play
According to All About Birds, Cattle Egrets are native to Africa and Asia and didn't reach the United States until 1941. I'm not sure how frequently they occur in Connecticut but this was the first one I've seen in Portland so I was very pleased. 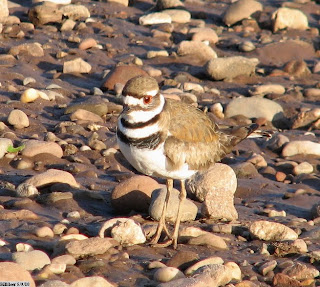 There were also some shorebirds including this Killdeer that was staring me down with its red eye. I wonder if the red eye reduction in photoshop would work on a killdeer? 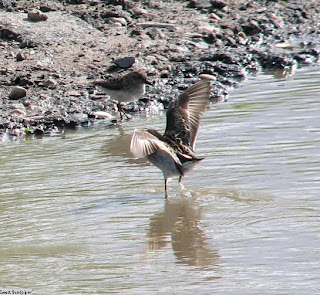 Least but not last, I spent a little time hanging with my peeps, the Least Sandpipers.
click to play
There was also a yellowlegs hanging out at the local mud puddle. I'm not always confident about telling a Lesser from a Greater Yellowlegs by sight unless I see the two of them side by side. The greater are known for making a 3 note calls but the bird in the video seems to be calling out in rapid single notes so I'm thinking this is a Lesser Yellowlegs.
-
Posted by Larry at 2:52:00 PM 11 comments:

May Birding Is Off To A fast Start 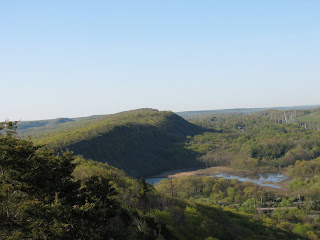 It was just a week ago that I hiked up Mount Higby in Middlefield. I was hoping to catch a glimpse of a few migrating hawks as they were passing through. I spotted a few high flying Broad-winged hawks but other than a few songbirds and a couple of butterflies things were fairly quiet. 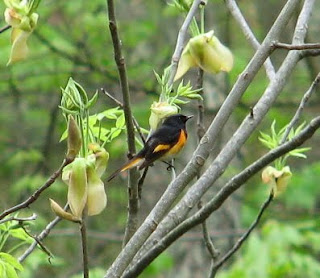 A week later everything had changed as as a good number of warblers and other migrants moved into the area. I saw or heard several species of warblers including: Pine, Common Yellowthroat, Yellow-rumped, American Redstart (photo) , Yellow, Blue-winged, Northern Parula-heard-?, Black and White, Ovenbird, and Prairie. Most of them were seen during Hartford Audubon field trips that I attended at the Amston Rail Trail on Saturday and Gay City Park on Sunday. Some of the other birds I saw or heard included Scarlet Tanager, Baltimore Oriole, Rose-breasted Grosbeak, Yellow-throated Vireo, Solitary Sandpiper, Veery, Blue-gray Gnatcatcher Least Flycatcher, Great-crested Flycatcher, and Eastern Kingbird. 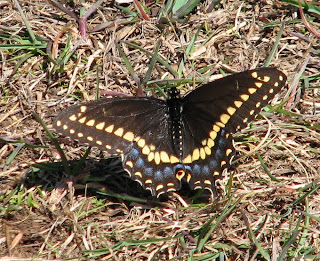 I have also seen several butterflies such as Spicebush Swallowtail (above), duskywing, and Eastern Tiger Swallowtail. 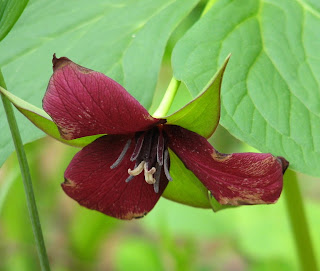 I believe this flower is a trillium that is sometimes referred to as a Stinking Benjamin. It has an unpleasant smell at close range that is supposed to attract flies. In the past when I heard people mention Trillium I would picture some sort of radioactive flowers growing next to a nuclear power plant. 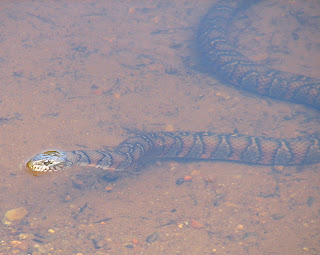 This water snake was firmly holding its ground as birders were passing by. I was impressed by the number of turtles, frogs and snakes that I came across this weekend. My wife called me over to the back door to ask me what was making all the noise in our yard Saturday evening. She was surprised to learn that it was frogs. I remember trying to track down noises in the past hoping to find an interesting bird only to learn from someone else that the sound I was hearing was coming from a frog.Tree Frogs and Wood Frogs were two species that had me fooled. 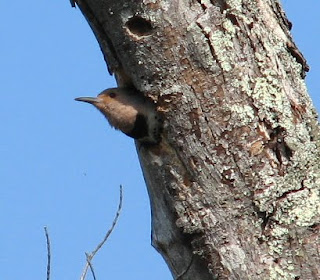 We spotted this Northern Flicker sticking her head out of the side of the tree hole.
-
There is so much I want to see and do in the month of May that I find it a little bit frustrating to have to wait for the weekend. It's like having free tickets to an all -you -can -eat buffet but you have to use a plate the size of a bottle cap and be out of the restaurant within an hour. I guess you just have to enjoy it while you can!
Posted by Larry at 4:40:00 PM 6 comments: