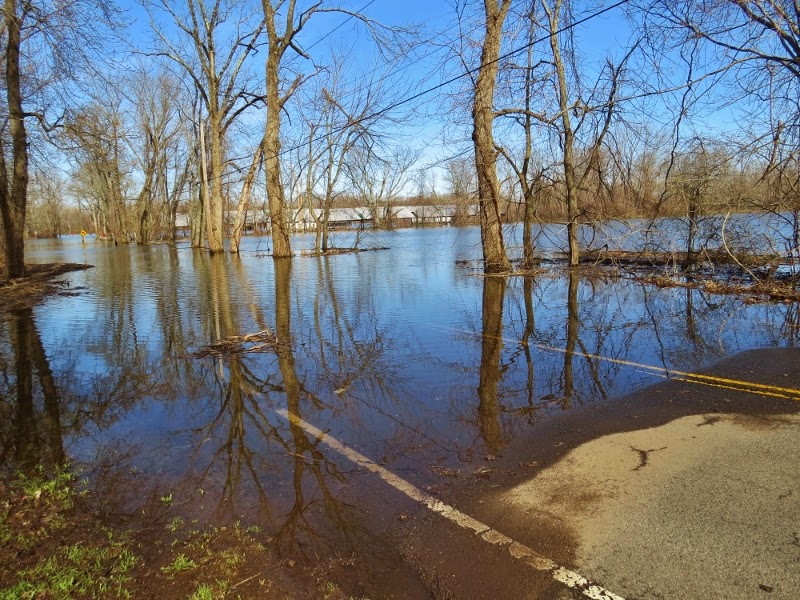 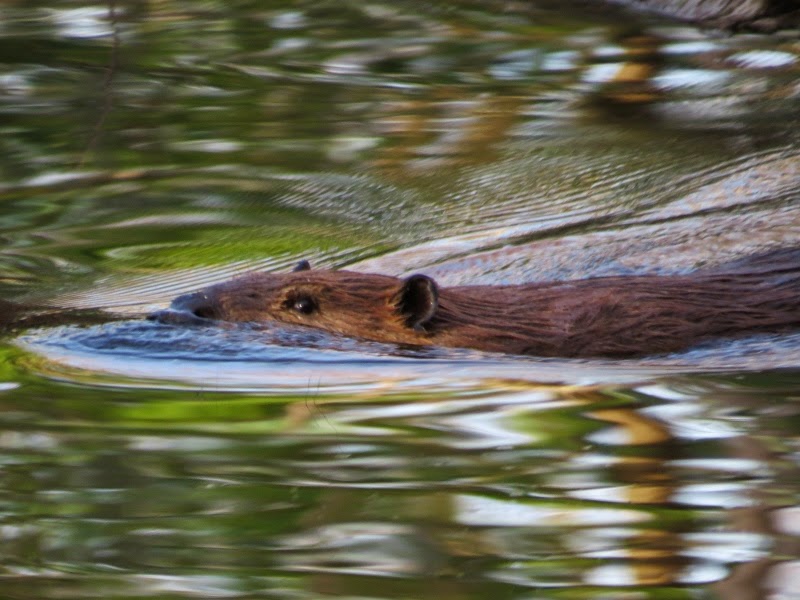 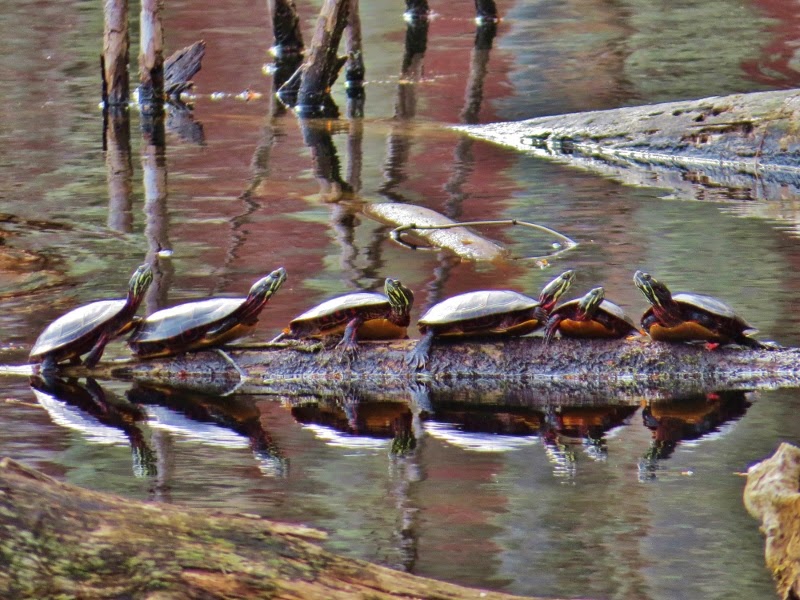 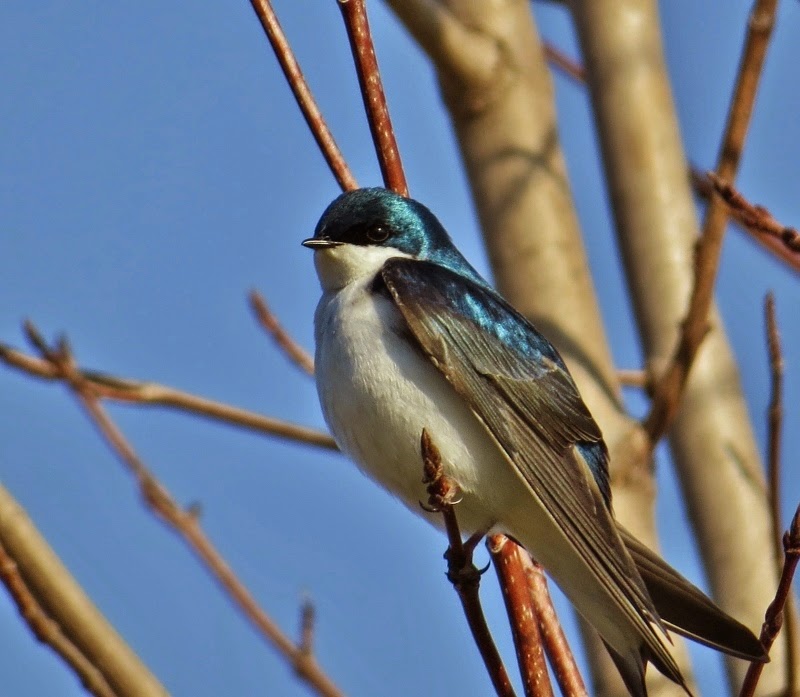 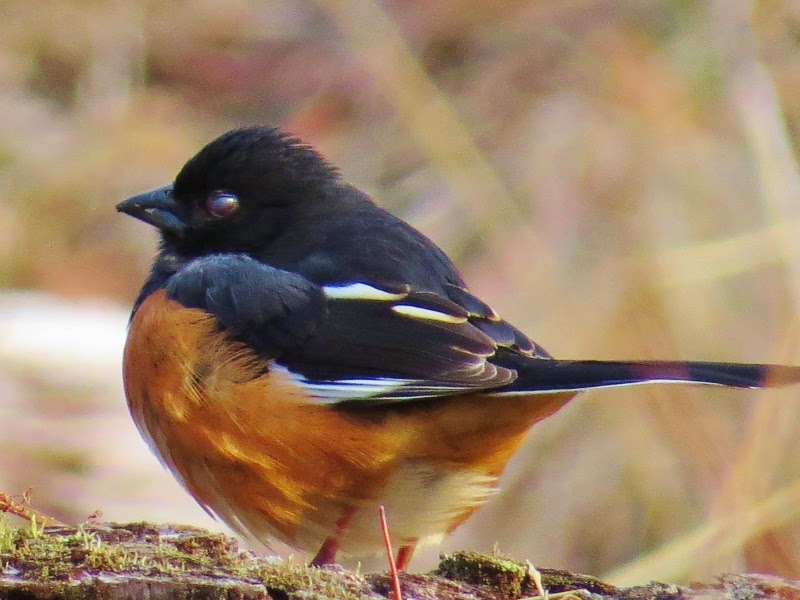 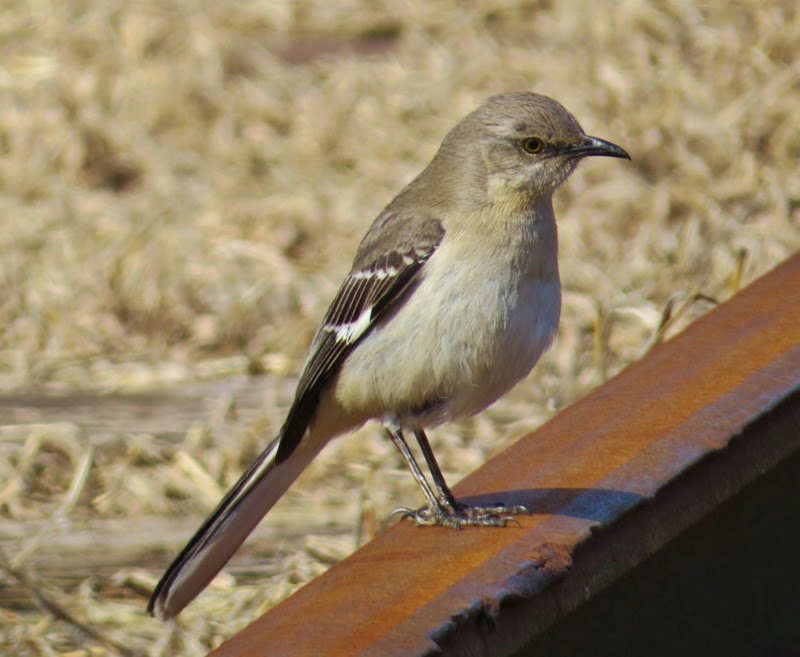 Some of the birds I found this past weekend were Pine Warbler, Louisiana Waterthrush, Palm Warblers, Barred Owl, and an American Kestrel. The Spring migration is just starting to get heated up!
Posted by Larry at 7:06:00 PM 5 comments: 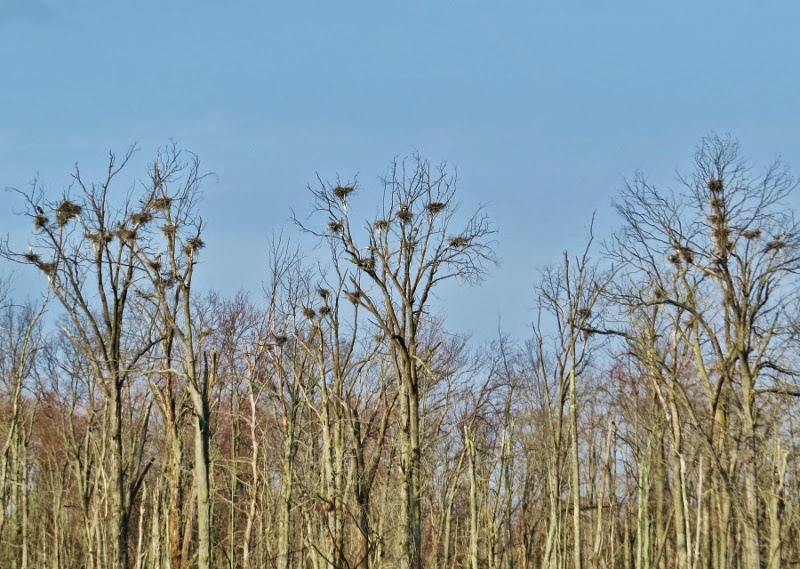 Portland is an ordinary small town in Connecticut best known for its Brownstone Quarries but tucked away within its meadows is a large Great Blue Heron rookery. You may not see the herons on the nest from this photo but they are there. I counted 120 adult herons on the nests this year and that's not including the dozens which were out gathering sticks for the nests, hunting for food, and flying over my head. 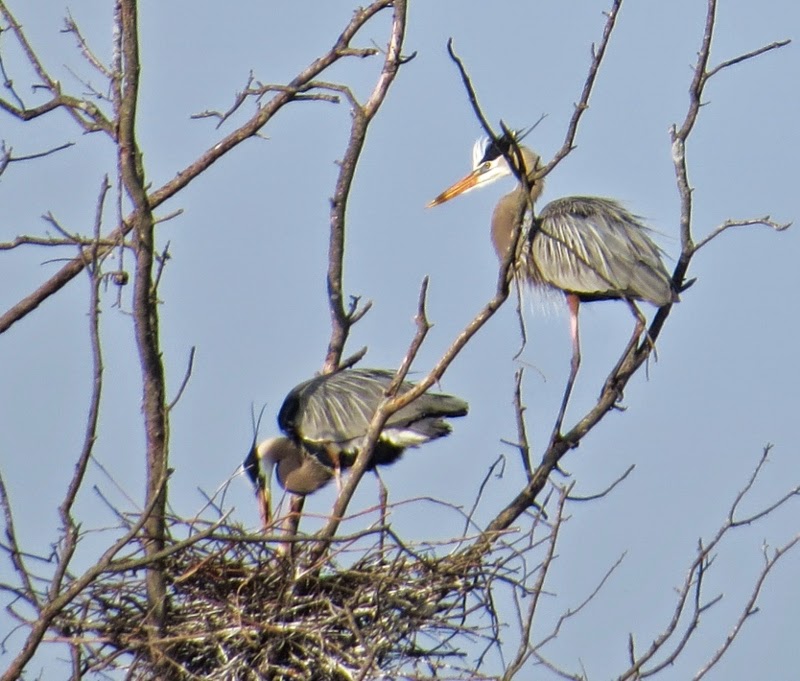 I used full digital 100x zoom for these photos so they are a bit distorted but it will give you an idea of how fascinating it can be to watch herons on their nests.The way they pose and posture themselves is like looking at a work of art. 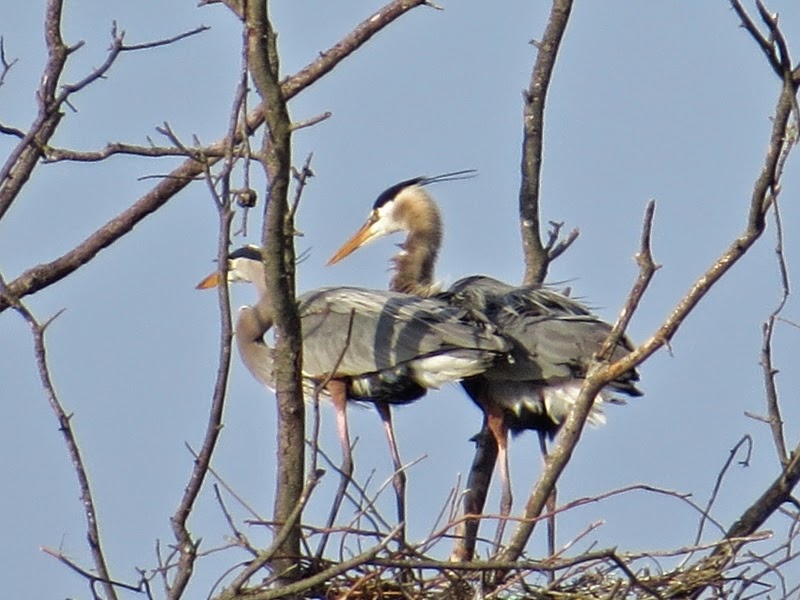 Pairing up side by side you can see how long their legs are. Males and females look alike although males tend to be a little larger. Great Blue Herons are usually monogamous for one season but often use a different nest and change their mate each season. 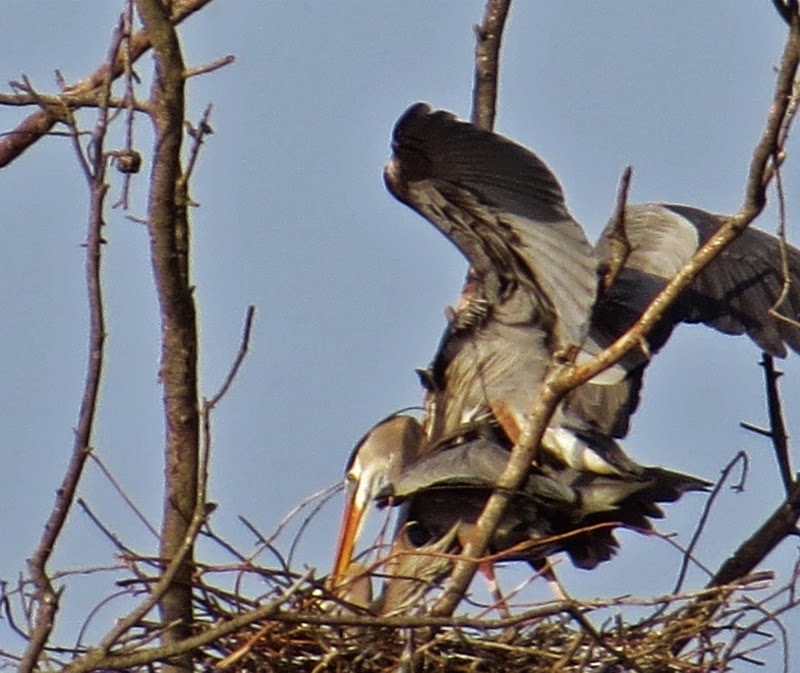 If you are patient enough to watch herons at a rookery for a while you'll be able to observe interesting behaviors, vocalizations, stick gathering for the nests, and even mating. I'll be looking forward to visiting again in May to see the baby herons in the nests. 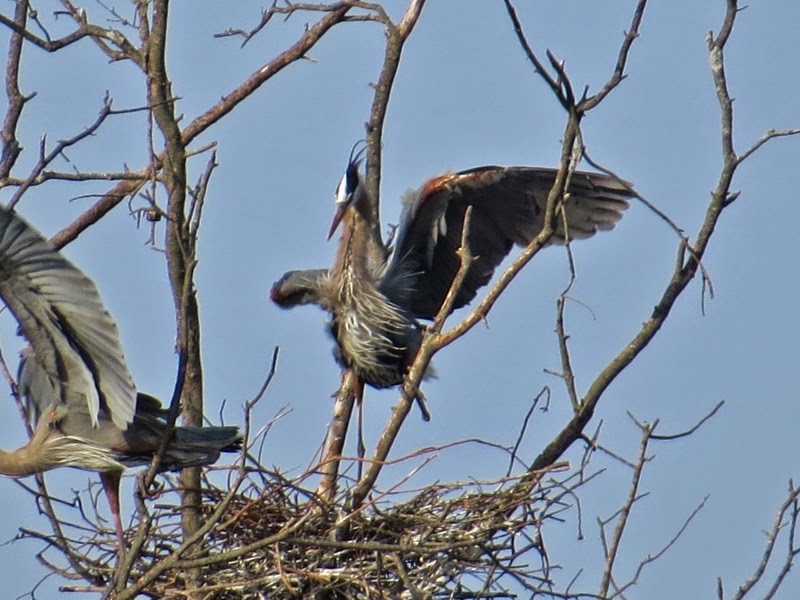 With Just a half mile walk down a trail and across a cornfield we are able to enter the secret city of Great Blue Herons. These giant birds have bodies 4 feet long with wing spans up to 6 feet in length. Seeing so many of them in action makes you feel like you've been transported back in time to the days of the dinosaur. It truly is birdwatching at its best!
Posted by Larry at 2:45:00 PM 12 comments: 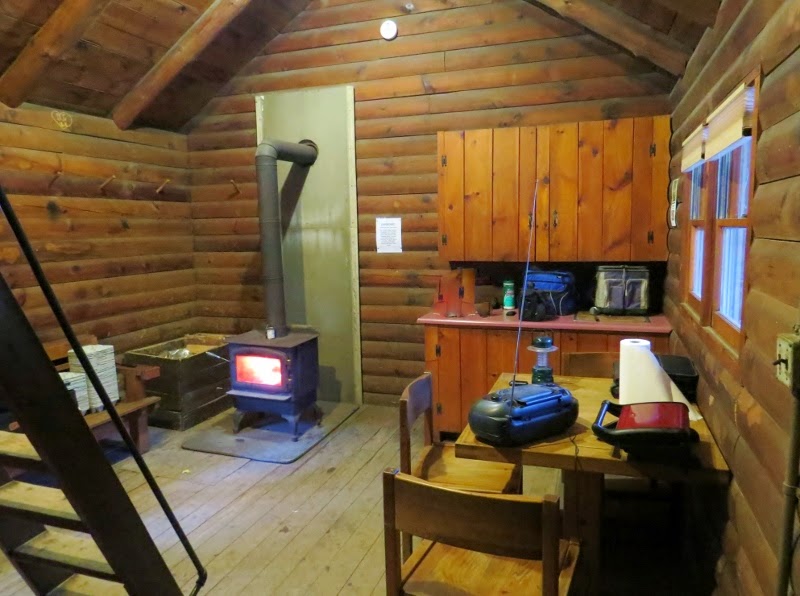 I  visited Mowhawk Trail State Forest last week and stayed in one of their thirty dollar a night bargain cabins. They are bare bones but do come with electricity and a very efficient woodstove. 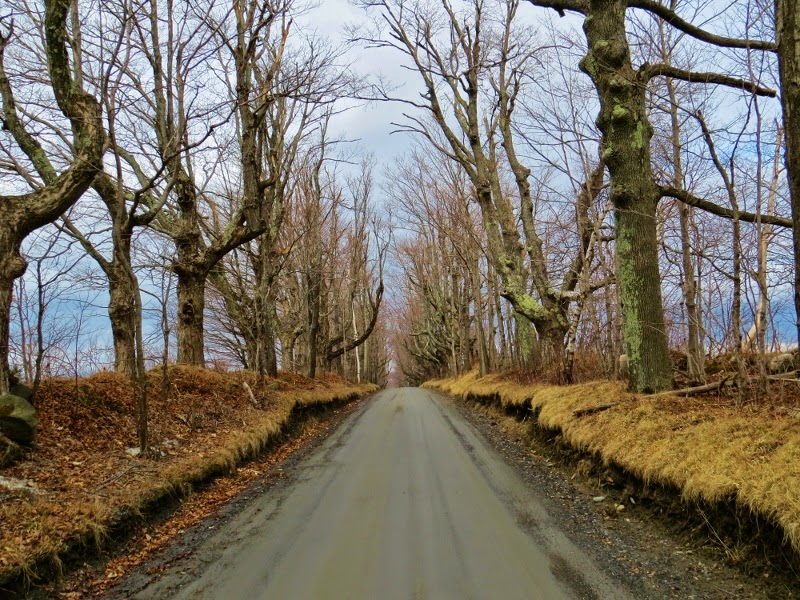 This farm road had a couple of yellow-bellied Sapsuckers playing hide and seek with me. These trees look like they came off the set of the Wizard Of Oz.

The Mowhawk Trail  is very quiet this time of the year. It's a change of pace from Connecticut where there are loads of restaurants, stores, and entertainment. In this part of the Berkshires there are only reminders of their native American History and a few small businesses that look as though they have been hit hard by the economy. There were even a few moments when I felt a bit bored which is a feeling that I rarely have. Even the guy who wrote that book Walden might have gone a little stir crazy around these parts. 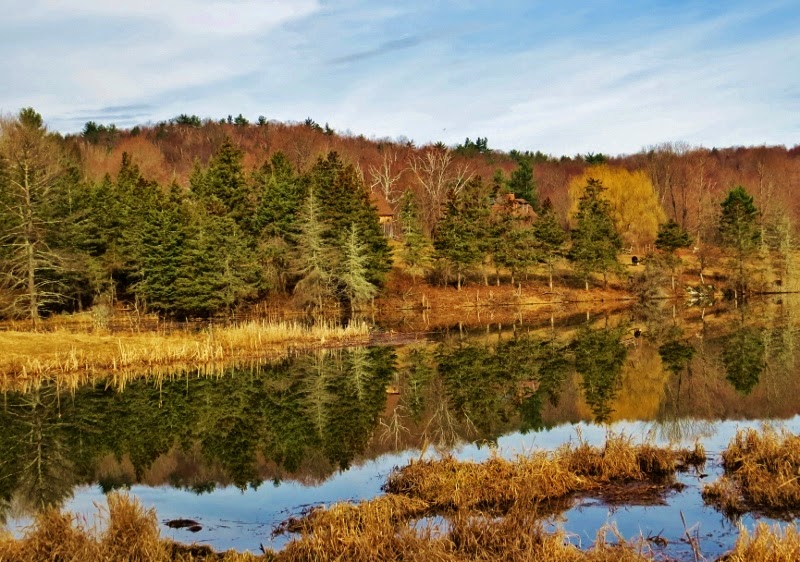 That feeling didn't last for long though because nature never fails to inspire me. I drove around some crazy mountainous roads and backwoods farmlands looking for birds and scenery. 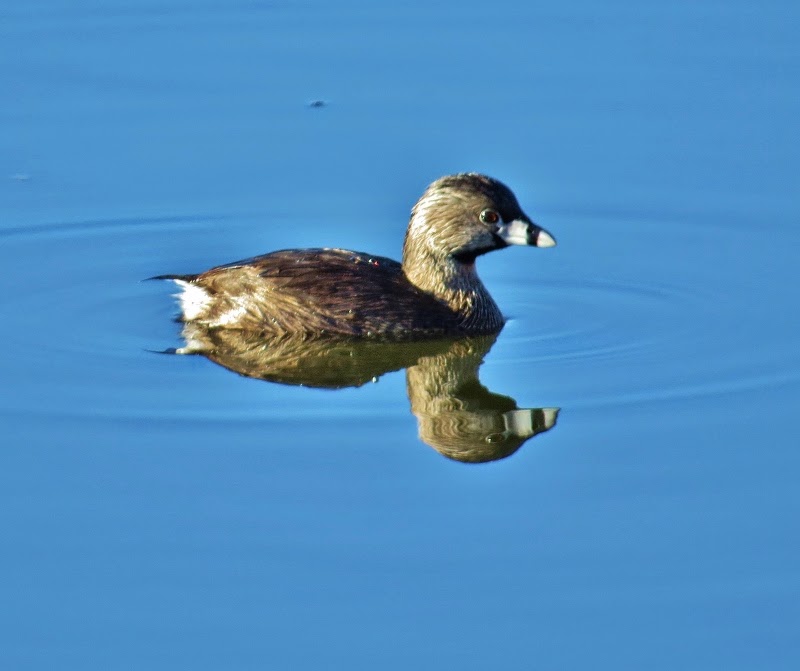 I don't often see Pied-billed Grebes but when I do they always seem to be solitary birds. They are tiny in comparison to other waterbirds and usually dive under water instead of flying away when feeling threatened. It's not the most colorful bird but I was fortunate enough to get close enough to see some of their subtle markings. 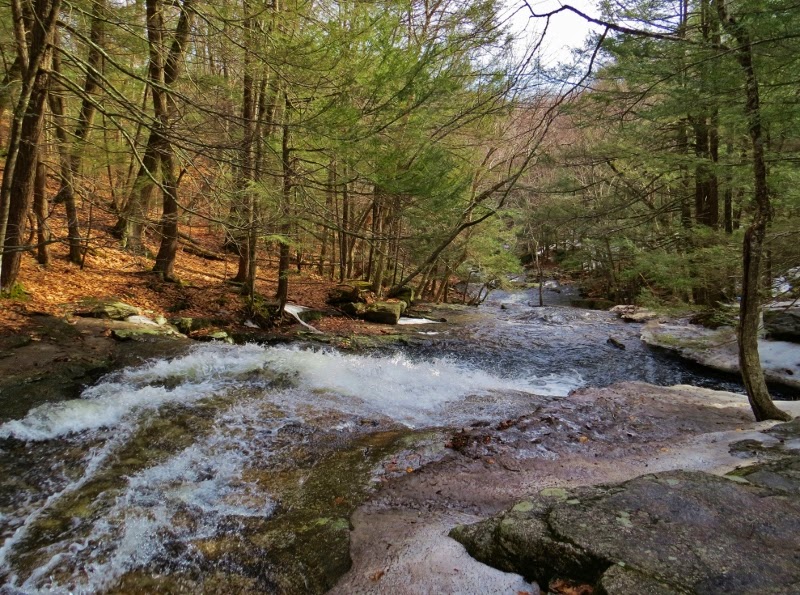 I found a nature trail along the way with a clear running stream with water that rushed rapidly over a descending stream bed. 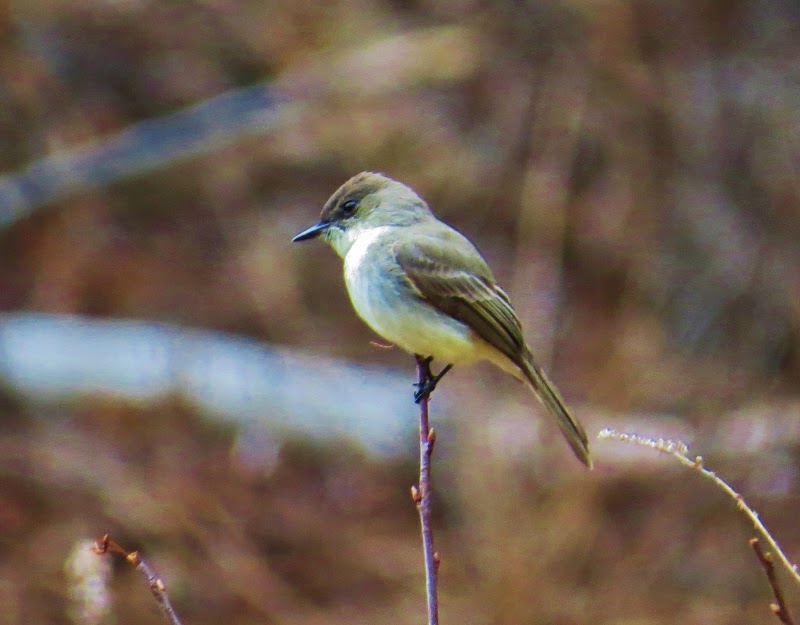 The only bird I saw was a lone Eastern Phoebe perched on a thin branch overlooking his kingdom.

Maybe the feeling of boredom is a reminder for us to open our mind and rely on imagination to keep us entertained.
Posted by Larry at 3:00:00 PM 3 comments: 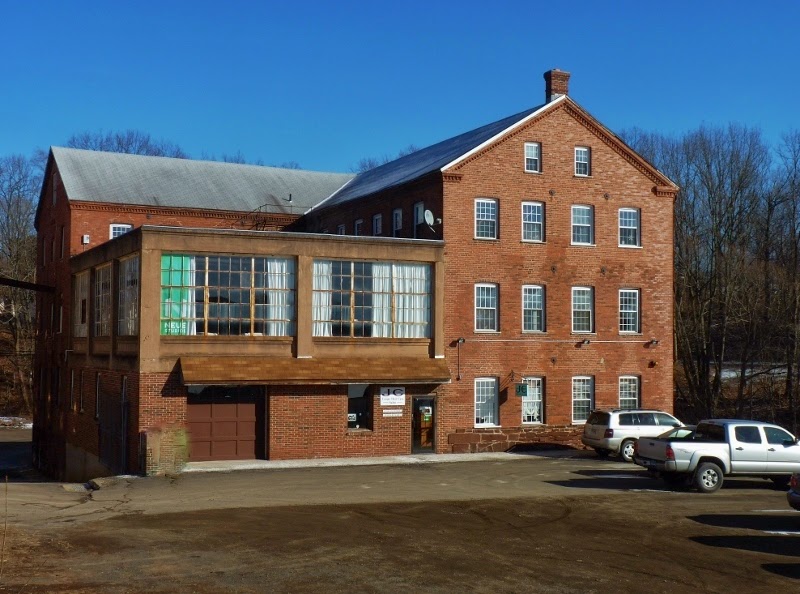 The building in this photo started out as a weapons factory in 1812 that produced  pistols, rifles, and commemorative swords for famous historic figures like Andrew Jackson. Today the building, which is located next to Starr Mill Pond in Middletown CT, is used for apartment rentals and small businesses such as art galleries, a hair salon, yoga, and meditation centers. The inside of the building has been updated but still retains some of the original character. There is also a beautiful waterfall not seen in this picture just to the right of the building. 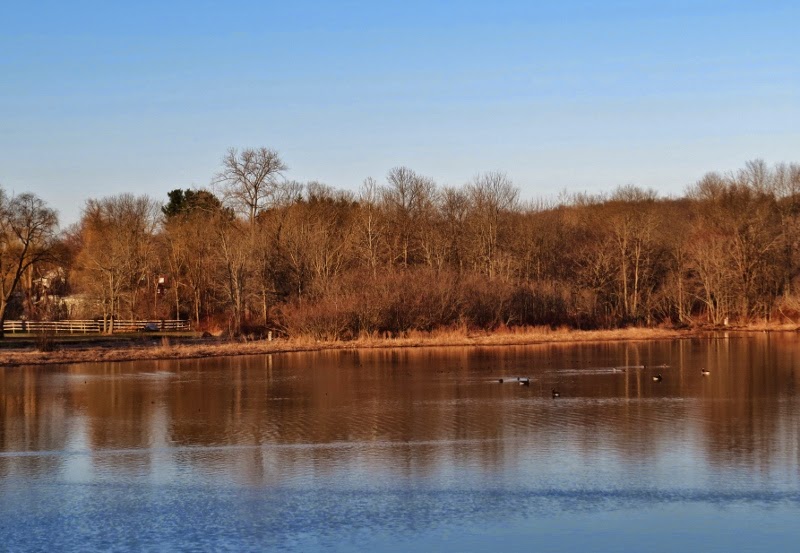 The Pond has lots of wildlife activity. I've seen beaver and muskrat swimming around and there were a nice variety of ducks and waterfowl over the last month including Ruddy Duck, Common Merganser, Hooded Merganser, Wood Ducks and Ring-necked Ducks. 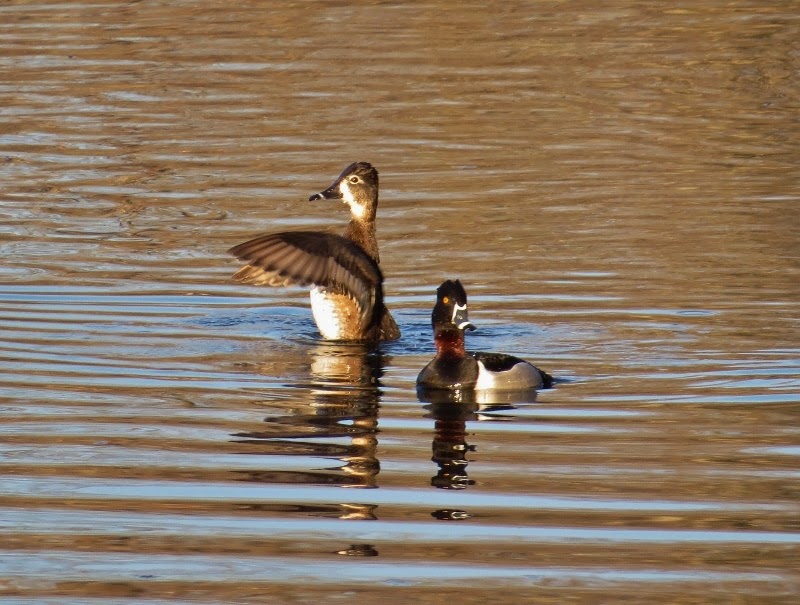 Here's a closer look at a pair of Ring-necked Ducks. You can see a hint of the so-called ringed neck of the male on the right. This "selfie" craze is getting out of control! Even the Mute Swans seem to be in on it! 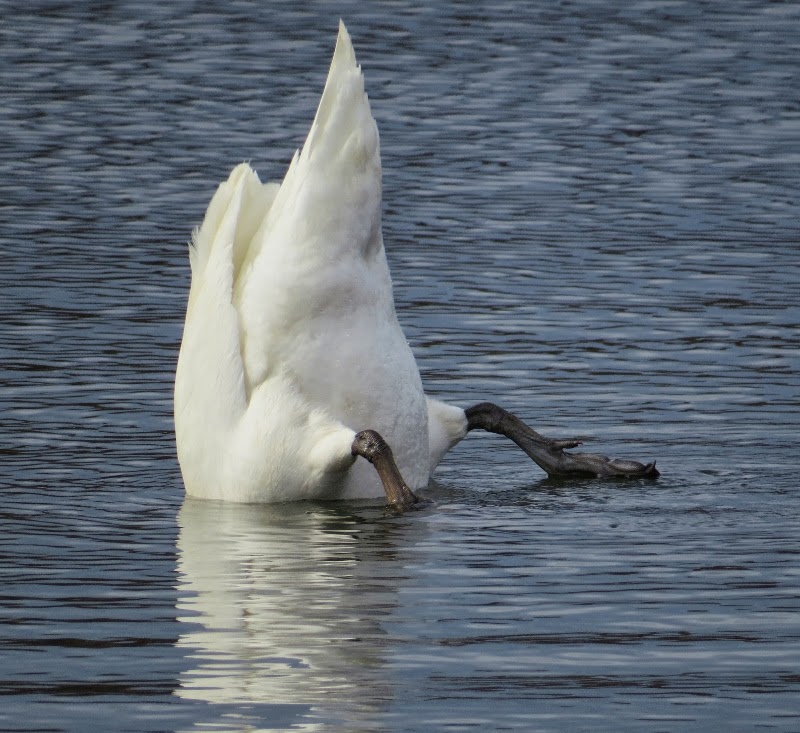 Not all Mute Swans like to show off their faces though.

I think it's great when old factories are preserved and repurposed. I can imagine workers on their lunch break 200 years ago standing in the same spot that I did. I wonder if they were seeing some of the same birds or if their might have been some different species around back then?

Please note: There are private apartments and businesses on the property so Starr Mill  is  not a public birding place.