Sunday Morning Along The CT River 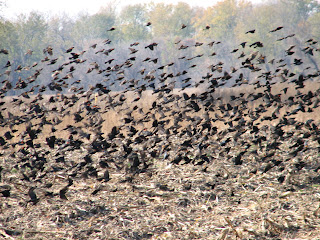 I've really enjoyed seeing large flocks of birds descend upon the fields in the month of November. A field that appears to be nothing more than dead, trampled weeds and grass, contains food desperately needed for their survival. This flock of Red-winged Blackbirds, European Starlings, Brown-headed Cowbirds and Common Grackles were feeding with such urgency on Sunday that my passing though represented nothing more than a brief interruption for them. 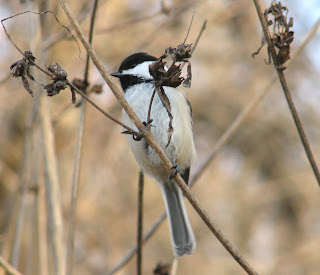 My first stop was at Wangunk Meadows right here in Portland. The temperature was in the mid 30's Sunday morning. The lack of wind and bright sunshine made conditions quite comfortable.
I intended to walk along the river until I reached South Glastonbury. That's probably about two miles. As it turns out, I only ended up walking about 100 feet or so. The birds were so active that I really didn't need to move. I was surrounded by Black-capped Chickadees, American Goldfinches, Dark-eyed juncos, Downy Woodpeckers, Red-bellied Woodpeckers, American Tree Sparrows, Song Sparrows, Chipping Sparrows, Eastern Bluebirds, Northern Cardinals, Blue Jays, White-breasted Nuthatches, and White-throated Sparrows. They were eating berries, searching though empty nests, and pecking at the hollow canes of tall weeds. They were so active and noisy that you'd think they were eating coffee beans! I could see 8 Wild Turkeys walking along the banks of Gildersleeve Island, perhaps looking for a place to hide until Thanksgiving day has passed by. Two Belted kingfishers took turns letting out their loud rattling calls as they flew up and down the river. A group of six Northern Flickers seemed to be communicating with each other in some nearby trees. The sounds they were making reminded me of the squeaky sound you hear when someone is trying to clean a stubborn spot off a window using Windex and a paper towel. A few of the other birds seen here included: 2 Brown Creepers, 1 Gray Catbird, 2 Fox Sparrows, and 4 Swamp Sparrows. 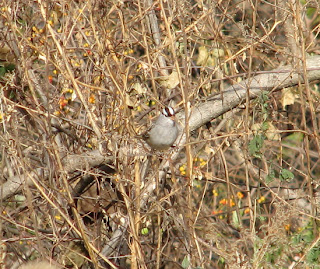 My next and final stop of the day was at Glastonbury Meadows. I finally came on a day when their was no hunting activity going on. I spent less than an hour here, but I was pleased with some of the birds that I found. After walking through the wooded trail, I entered the fields. A mature Bald Eagle took off in flight not more than 30 feet from me. You don't really appreciate the awesome size of these birds until you are really close to them. I once had a view of two Bald Eagles when I was standing 10 feet above them. I looked down over a cliff and watched as they spread their wings and took off in flight. I was shocked. They looked enormous from that angle!

As I walked along the edge of the fields, I was repeatedly hearing the song of one particular species. I wasn't familiar with this particular song but soon discovered it was coming from White-crowned Sparrows. During most years, I only see a few White-crowned Sparrows in Connecticut. On this day, I saw ten, but by the number of birds I heard singing there must have been many more in the area. Moving further along, I heard the sound of a woodpecker making the sound of squeaky toy. It was an immature Yellow-bellied Sapsucker (although I'm sure it was acting its age). A flock of American Crows passed overhead. Interestingly, it seems that a Fish Crow was leading the flock. You can best identify the fish crow by the unique nasally call that they make, which is much different than the American Crow. I wondered if the Fish Crow had to stay at the front in order to have permission to travel with the flock of American Crows? I heard the chip notes of a sparrow coming from some birds that were well hidden amongst a patch of weeds. They kept flying from one spot to another but were hard to see. I was finally able to identify them as Savannah Sparrows. There were Red-tailed Hawks and Northern Harriers patrol the fields. There was also an interesting flock of about 100 Rock Pigeons(some odd variations). If I had the time, I would have checked them out more carefully.

The last species of the day that I identified before leaving was a flock of about 50 American Pipits. They seem to stay close to the ground flying just a short distance away as you move closer to them. I was able to see a bit of the white outer tail feathers when they took flight. I only saw my first American Pipit two years ago. It took me quite a while to make a positive identification of the first one I saw. Since seeing that first one, I seem to have a much easier time locating them. It seems that way with a lot of birds that I have seen for the first time. Once you see the first one, it is usually easier to find more. Has it been your experience that it is much easier to find more of a particular species after you have seen the first one?

What a day you had Larry! WOW! To see that many different birds in one day is amazing.

Larry, are all these birds staying around for the winter in your area, or are they still migrating? What a list! Seeing a bird makes it easier to ID again for sure. I am learning WHERE to look more than anything. As you said, a dead looking field can be a very productive birding area.

Wonderful list of birds and Happy Thanksgiving to you and your familY!

A bird in the field is worth 2 pictures or more of a bird in any field guide. I have found as you that seeing a bird up close and personal makes the others that follow so much easier after that, and the more you see it the easier still it becomes. I'm sure just for fun we could come up with some kind of mathamatical formula and call it something like the Inverse Birding Ratio, or something cool like that. You'll have to pardon me, I think I O.D. on Turkey!
Vern

Jayne-It was a nice variety of birds but it's really not that many in terms of number of species.Actually I didn't list everything I saw.-Usally never do list everyhting.

ruth-Where is the key part of it-and knowing where to expect certain birds.

Pa-birder-That's very true-Listening to bird song or looking in a field guide does not match what you experience in the field. They do go together like a puzzle though once you see the bird in the field.

I enjoy the way your describe their calls and activities. I've never had a list so long...!

For me, it's always easier to identify a bird after seeing it the first time and remembering where it was and what it was doing. This does not apply to LBJs, however.

Mary-thanks-Having a long list is not a big deal if you go to a hot birding area and bring along another birder as an extra set of eyes/ears.

Ruth-
Snow Buntings,Longspurs,Horned Lark, Pipits and a handful of other can be found in CT from late Fall into the winter at some locations.

I think it's easier to ID a bird after you've seen one in the field; after that, at least for me, the bird seems to "stick" in my memory, and it becomes easier to recognize. This really applies to vocalizations as well; it's one thing to listen to the CD sounds, but hearing it in the field really drives it into my memory. You also hear the variations and things you might not get on a CD.