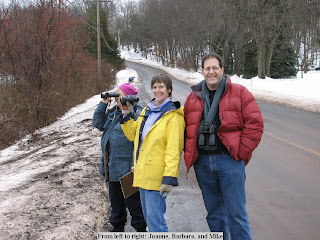 I participated in the annual Salmon River Christmas Bird Count Sunday, which had been rescheduled from the previous Sunday due to inclement weather. I teamed up with Joanne, Barbara, and Mike (above photo) to cover the Portland territory. There was a very light drizzle throughout the day, but it was comfortable, with the temperature in the 40's and minimal wind.
-
Joanne is the team captain for the town of Portland during the annual Salmon River CBC. This is the third year that I've taken part in this annual tradition. We started our count near the Portland Reservoir, which was frozen over, along with all of the other ponds in Portland. Mike and I walked up the snowy path to investigate the edge of Meshomasic Forest while Joanne and Barbara searched near the main road.
-
For the first fifteen minutes, the area that Mike and I covered seemed practically devoid of birds. Our first breakthrough was a flock of 25 American Robins that passed overhead. We started pishing near a stand of tall pines. You know that it's a s-l-o-w day if I start pishing because I don't particularly enjoy doing this activity in front of others. The Black-capped Chickadees started to move in to investigate, followed by Tufted Titmice and Downy Woodpeckers. Shortly thereafter, we caught a quick glimpse of a Golden-crowned Kinglet. The final species we recorded in this area was a Yellow-bellied Sapsucker. Joanne and Barbara said that their area was fairly slow but they did manage to add a Carolina Wren to the list before we left.
-
Other areas we searched included power line crossings, woodland habitat interspersed between houses, open fields , stream banks, a cranberry bog, and a small section of the Connecticut River.
Here are some of the highlights of the day:

I think that we all enjoyed watching the birds more than we did counting them, but we did our part. It is one of the smaller CBC's in Connecticut but I really enjoy the fact that it takes place in my own home town. The total number of species for the entire count (includes people from other towns) was 67. In comparison, the Milford/Stratfordcount which includes part of the shoreline had an unnoficial total of 117 species.

We took a lunch break at Rossini's Restaurant, in the town of East Hampton, and met up with two other birders (Rob and Alberta) who were also involved with the count. It was interesting comparing notes with them about the birds we saw. I will pass on the final results of the count when I receive them.

Saturday, I was in East Hartland trying to find some Pine Grosbeaks. I didn't have any luck finding the grosbeaks but I did see a flock of about 50 Cedar Waxwings and also recorded this video of Wild Turkeys eating something in the snow. This is the first time I've uploaded a video! Unfortunately, you can hear cars in the background, as well as me zooming in and out on the turkeys. If you listen closely, you can also hear the turkeys.
Posted by Larry at 3:58:00 PM

Larry,
Those costal counts and other places with a wide variety of habitat do run up some envious count numbers, but it sounds like you had a good time which is the most important thing about a CBC. You counted the birds that were there, which is what the CBC is all about.

Great CBC! Merry Christmas and good birding always to you!

You saw an interesting variety of birds. You have quite a bit of snow for robins to be about. I liked your video very much. It uploaded very nicely and I could hear the turkeys.

Congrats on a wonderful CBC and good to hear your second date was a safer one for everyone! I love your video of the Wild Turkey! Hope to see more from you!

jayne-Glad the video worked for you.-It played on realplayer for me but not media player for some reason.

pa-birder-Yes I suppose I do get a touch of coastal envy but like you say-just count the birds that you see is the name of the game.

monarch-Boy Tom you are quick-I think you visited my blog before I finished posting my first comment on yours! -thanks for the comments -much appreciated!

Hi Larry,
I'm glad you had a good day for your CBC--it makes it so much nicer when the wind doesn't blow, doesn't it?

I really liked your turkey video and was amazed to see how close they were to the road! It's fun to hear them "talking" to each other. I've learned to be a better turkey caller after listening to the real thing!

Larry, great use of the video. Video definitely offers another perspectve that a picture can't. Great day of counting for your team. Congrats!

Love the turkey video. I've never done a CBC but hope to some day.
I'm visiting the Pacific Northwest Coast so I'll look out for some good birding here.
Happy Holidays.

Our CBC was rain-drenched and I didn't even get to go (ill).

Sounds like you had a good day on yours, though. Congrats!

ruthiej-Yes-wind is not my friend.-I was actually surprised to find out that when you imitate a Turkey in front of a group of them-they talk back.-I haven't tried it on the wild ones yet though--just ones that were on a farm.

j. karl-One thing I like about video is that it shows more with less pixel quality.

dzugman-sorry it didn't work out for you but there's plenty of good birding to be done.

Merry Christmas! Your day was the definition of a "birdy" day. Congratulations!