6 Ways I Made The Most Of My Fall Birding 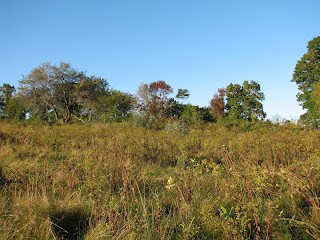 Every Fall new species of sparrows arrive in Connecticut just as warblers are heading south. I had no specific plan over the last two weeks but I knew that I wanted to take the opportunity to observe sparrows and warblers in more detail than I usually do. Here is a list of 5 things I've been doing to get the most out of my Fall birding.

1) I found a new birding spot that's good for sparrows

I did some birding at Bear Hill Wildlife Management Area in Bozrah. I found it in a book titled "Finding Birds In Connecticut" written by Dave Rosgen and Gene Billings in 1996. The area consists of large open fields divided by hedgerows with a few trees scattered about. The land is managed by the DEP and is used extensively by hunters. It would be best to visit on a Sundays during hunting season. During my first visit the entire place was loaded with hundreds of birds in the trees and fields. I thought that I had found a birder's paradise. I soon discovered that most of the birds I was seeing were Yellow-rumped Warblers . It still turned out to be a good spot. I saw a variety of sparrows including Savannah, (8) Field Sparrows, White-throated Sparrows, Chipping Sparrows, White-crowned Sparrow, Song Sparrows, (6) Eastern Towhees, and a Lincoln's Sparrow. There was also a flock of 30 Eastern Bluebirds that seemed to take a liking to an old barn on the premises. 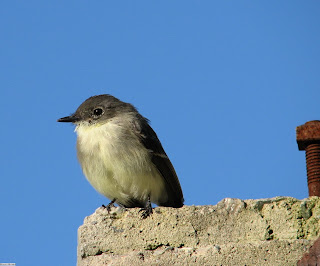 There were a lot of Eastern Phoebes there as well. The one in the above photo flew directly at me three times as I tried to take it's picture. I don't know if it was provoked by a reflection from my camera lens, the beeping sound of my shutter going off, or it was just bothered by my presence. I managed to get a photo after it decided I wasn't worth the trouble. 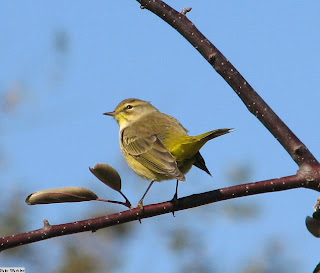 2) Don't touch that camera just yet!
In the past, I've relied on taking photos of birds so that I could use them to help me with identifying them afterwards. This method has worked well for me on many occasions but there are some drawbacks to doing it this way. One problem is that if you don't get a usable photo of the bird in question then you'll miss the opportunity to identify it if it flies away. I've decided that from now on I will only try to take a photo of a bird only after I've identified it or at least studied it long enough to remember what it looked like. I used this principle to help me identify my first Nashvile Warbler.
-
I was standing next to an old apple tree when I noticed a small bird moving about in the branches. I noticed it was very small and fairly plain on the side. It did have a notable eye ring and at first I thought it might be a Ruby-crowned kinglet. Then I noticed that it was quite yellow on most of its underside including underneath its tail. I was tempted to try to take a photo but I'm glad that I didn't. The bird flew off after only a few seconds. If I had fumbled with my camera, I never would have gathered enough details to make an identification. I took a photo of a Palm Warbler instead and let the picture of my first Nashville Warbler remain in my mind.
-3)Remembering to consider behavior and habitat when attempting to identify a mystery bird:
I was recently out with a small group of birders when we found a small bird hiding in a tiny patch of tall grass in what was otherwise an open field with relatively short grass. We managed to get brief looks at the bird and were able to determine it was a wren of some sort. The only wrens we had previously seen in this inland birding area were House Wrens and Carolina Wrens. A wren that is secretive and hiding in a little patch of marsh-hmm-what could it be? Some of us finally got a better look at it and confirmed what our suspicions. What was it? You guessed it-a Marsh Wren.
4)Avoiding the game-show birding mentality:
Part of what makes birding with a group fun is to be able to contribute by finding interesting birds. Sometimes I have a tendency to be in too much of a hurry to identify birds in these situations which can lead to mistakes. When birding with a group I plan to take more time looking at a bird before announcing what I've seen. In other words I'm working on accuracy instead of quantity. I think it's also a good idea to confirm identifications made by other birders in the group. Sometimes rare birds are overlooked because others in the group have a tendency to go along with the initial identification without taking a careful look at it. 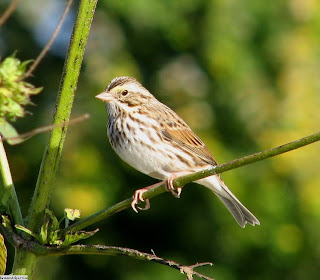 5) Studying sparrows a little more closely:
I'm comfortable identifying most of the sparrows we see in Connecticut but still can become confused with certain juvenile birds especially when they only give you a split second to look at them. There are also some of the rarer sparrows that I haven't seen at all yet. Sparrow markings vary quite a bit not only in different species but also in individual birds. I want to pay closer attention to more subtle details like tail length, overall shape etc. 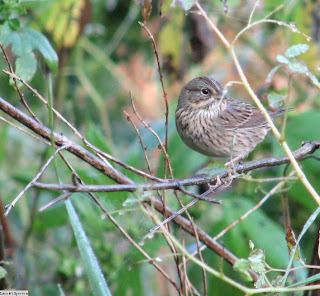 6) Using reports from other birders to help find birds in your local area :
The COA has a listserve which allows you to read reports from birders throughout the day so that you can read about what everyone hasbeen seeing. I don't see many Lincoln's Sparrows in Portland but when I have they've been at Wangunk Meadows. A report came through that Lincoln's Sparrows had been seen in the town of Glastonbury which is just a few miles north of Portland. I went down to nearby Wangunk meadows, and sure enough I found Lincoln Sparrows there (see above photo). I also noted that other birders had seen Nashville Warblers in Connecticut on the same day that I saw my first one. That made me even more certain that the warbler I had seen was a Nashville. Paying attention to what birds other birders are seeing can be a useful tool not just to find rare birds but also to stay informed about what might be moving through your area.
None of the ideas I listed are new to me. They are things that I've read, heard, or done before but knowing and doing are two different things.
Posted by Larry at 5:42:00 PM

All good info. Just be nice to all of those sparrows & palm warblers on their way to my place for the Winter! (I'm already looking forward to them, too. ;)

Hi Larry,
Wow the list of warbler you saw is quite impressive and this seems to be a good spot.. Thanks for all the info too, quite useful to know all this. A very nice post you did!

An excellent 'code' to follow Larry and I'm sure it will always pay dividends. FAB

Lana-As long as they're cooperative I'll be nice to them.

Early Birder-It would probably always pay dividends but i don't always follow my own rules.I'll probably have a differnt list of rules next years-things are always changing.

Larry,
A good list. I too look forward to Sparrows as they come on through just after Warblers. I too like slowing down and learning finer details of species rather than just checking them off. Slowing down does help to find birds that otehrwise would be overlooked. As an example, this afternoon I found a Black-throated Gray Warlber, a rare bird in the east and a life bird for me, while taking it slow, looking for sparrows.I'll throw up a post about it in a couple of days.

Vern-I would be excited to find a Black-throated Gray. Hopefully my birding skills will improve over the next year and I'll find something rare on my own.I've always wanted to come across something rare by chance.I haven't really found any birds that were all that rare on my own.-someday.

Is there no hunting allowed on Sundays?

forestal-The camera isn't bad when your dealing with larger birds that stay in one place but it can be hard to get a good photo of an unidentified warbler that's bouncing around.

Mathew-For the most part that's true but I have heard people huning on Sundays.

Great post....lots of info. I definitely use the old "find reports from other birders to help find birds in your local area" routine to help me find birds! The cabin in the previous post looks like fun. I've never stayed in anything that rustic, but I think I might like it!

Good photos and advise. I particularly like the photo of the Eastern Phoebe...what a handsome and delicate little creature.

Thanks for stopping by... I love the water and boats in the Harbor as well. :)

Good pointers Larry. I had an interesting experience that could be an example of point Number 4. when I went out on my first birding trip with a group of more experienced birders. One of them called out a bird to be a certain species, I don't remeber what now, but it looked different to me, so I challenged them and said it was different-look at the green tail and the rusty cap. Finally one of the guides took another look and identifed it as a green-tailed towhee. That was the first time I had ever seen one and I was glad I spoke up! It was in the Wasatch Mountains of Utah.

Kelly-This is really me giving myself my own advise in a post.