Allowing The Camera To Choose The Birds 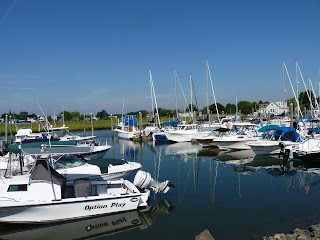 I purchased a new Panasonic DMC-FZ35 camera from Amazon which arrived just in time for the holiday weekend. I had high hopes that this camera would be better in terms of image quality than my Canon S2IS. It took one day of failed attempts of trying to photograph a Prairie Warbler to realize that a new camera wasn't going to make photographing birds any easier. I was anxious to see of what kind of potential the new camera had so I to choose a location where the birds were a little more cooperative. Instead of insisting on getting shots of a particular species, I decided to let the camera choose the birds. I took a ride down to the Guilford boat launch. Although I didn't see a large variety of species during my visit there last year, I was able to get fairly close to the few that I did see. 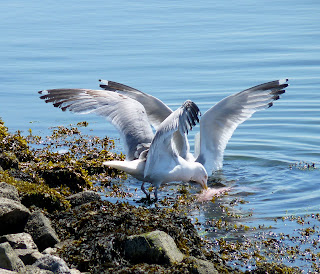 These gulls kept themselves busy by fighting over a scrap of fish that one of the fishermen left behind. They reminded me of those synchronized swimmers you see in the olympics. 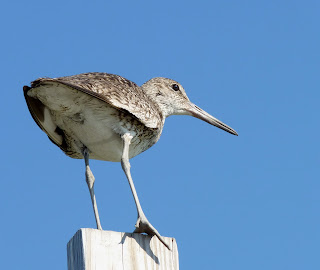 There were plenty of Willets around and they aren't particularly shy during the summer months. 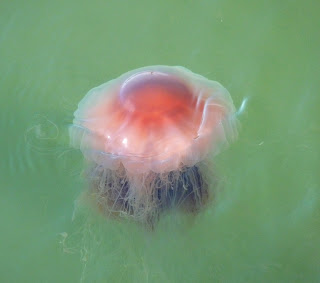 I thought this jellyfish looked a little like a sunny side up egg. 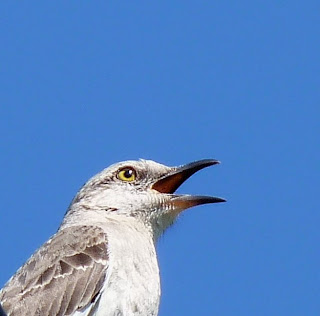 The sunlight was pretty harsh by the time took the picture of this mockingbird but at least it was in focus. I read a lot of complaints about cameras that produce images with a lot of noise in the reviews that I read. I spend too much time deleting pictures that are dark or blurry to worry about ones that have noise. 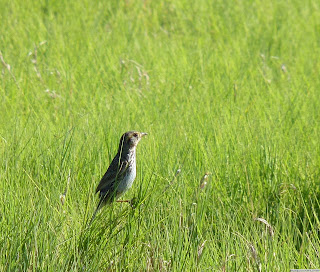 I tried to get a picture of this sparrow that kept popping up out of the marshy grass. At first, I assumed it was one of those saltmarsh sparrows but after taking a closer look at the photo I'm wondering if it might be a juvenile Seaside Sparrow. The lighting makes it difficult to see a lot of detail. What do you think? 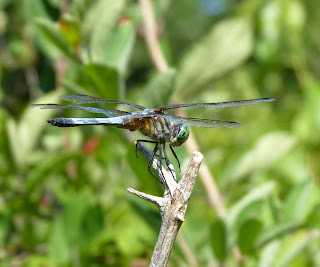 This dragonfly was courteous enough to land on a stick right in front of me. Does anyone know what kind it is?

These flowers look a little like Tiger Lilies to me. Can you identify them? I used the flower mode on the camera for these. 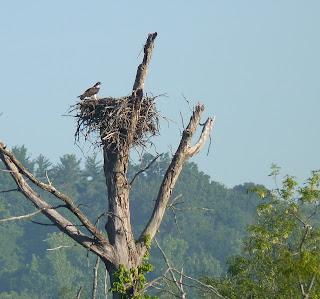 I enjoy seeing Osprey nesting on platforms along the Connecticut shoreline this time of the year but it was kind of nice to see them build a nest in a tree for a change. This photo was taken inland not too far from where I live. 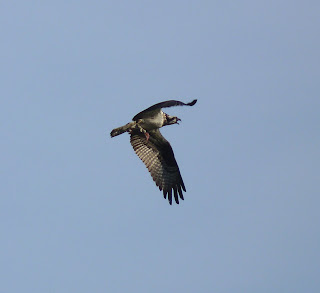 I didn't get anywhere near the nest but I think this Osprey was telling me to back off so I did. They seem to be more tolerant to human presence at the shoreline nest sites.
-
Is the Pansonic FZ35 better than the camera that I have now? Maybe slightly better, but that remains to be seen. It has more optical zoom which makes it more sensitive to camera shake but when I can keep the camera steady, the images seem slightly sharper than the Canon. The video I took came out nice and clear but I haven't figured out how to edit and upload it yet.
-
Buying a new camera has boosted my enthusiasm for attempting to photograph birds but it won't do me much good if I don't use it properly. With that in mind, I borrowed a DVD from the local library called Digital Photography Unleashed. It gave me some useful tips along with a few new ideas. I have no intentions of trying to become a real photographer but it would just be nice if I was able to get a higher percentage of usable pictures.
Posted by Larry at 5:27:00 PM

Hi Larry,
Congrats on your new camera... I hope it will fulfill your wishes. I love the jellyfish picture, it's pretty cool!

Congratulations on the new camera Larry, you took some fantastic pictures.
the dragonfly looks like an Emerald - possible American (i am enjoying watching dragons/butterflies/insects along with birds )

Chris-thanks-I just got through reading some of your recent blog posts. Remind me not to complain about too much sun.

Dan-thanks-Maybe I'll get around to buying that Kaufman insect book this year.

Larry, it looks like you did well with that new camera. I like the shot of the jelly fish. I always hate having to relearn how to use any new technology. It seems I barely get one system down and they update everything and I have to start all over again!

Gus and I have the benefit of having a zoom with virbration reduction. I can't imagine having to hold my camera that still to get a crisp photo! Good luck with your new camera. I look forward to more posts with new photos!

BTW, I think it was near 204F here today, but then some clouds moved in and it dropped to 101! I'd better get my parka out!

Kathie-It has vibration reduction but since it has more zoom than my other camera it still takes a steadier hand on my part so I just have to lean against something or use a prop if I'm at full zoom.
As long as you don't reach 212 you'll be okay. You wouldn't want to reach the boiling point, especially while wearing a parka.

I love the 12X zoom on my Kodak, but even with image stabilization it's tough to get clear shots on full zoom, let alone when you get into the digital zoom. Mary (from Mary's View) mentioned holding her breath when she snaps a photo, which has also helped me get crisper images at full zoom.

Thanks for this review, though--my old Kodak is starting to show its age, and I'm completely undecided about what to save for next.

I think you have a winner in that camera, it seems to have good dynamic range, and color. Even the high sun shots are good.

I'm not sure if your gorgeous flower may be a variety of Wood Lily, I haven't seen any like that in Ontario.

I use a website for Conneticut plants when I am stuck, very informative. You can find it here:

I don't know if I can help with your IDs much...have you tried bugguide.net for the dragonfly & davesgarden.com for the flower?
I hope you're happy with the new camera. Despite Canon's high ratings through many outlets, the noise really bothers me. I don't know that any digitals can beat film cameras in that respect. At least not yet, anyway.

Larry, you came up with a series of wonderful pics. I particularly like the photo with the sparrow (can't help you with ID) for the beautiful texture of the tall grass. It took me a while to learn the ins and outs of my Panasonic FZ28. I found it extremely difficult to photograph a bird against a busy background, but my Nikon DSLR doesn't do it that much better. I find noise is usually introduced by a high ISO or by trying to enlarge photo too much. But I think you got a really nice camera. Congrats!

dguzman-I usually try to lean against something or set the camera on something.I'll have to try the holding the breath.I just hope I don't pass out while trying to get a picture.

Harold-thanks for the information and I'm pleased to hear that you think I've chosen a good camera. After seeing the photos on your blog,I'd say you must know what you're talking about.

Lana-I never used a film camera before other than a throw away. I know that I could get the id's on the flowers and whatnot but I just put it out there to see if someone else knows.

Hilke Breder-thanks-I always have difficulty getting a bird against a busy background.It is usually gone by the time I think about manually focusing.This camera has been slightly better at focusing on my inteneded target than the canon was but I still face the same focus challenge when it comes to birds in the bush.