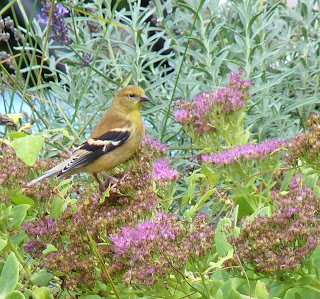 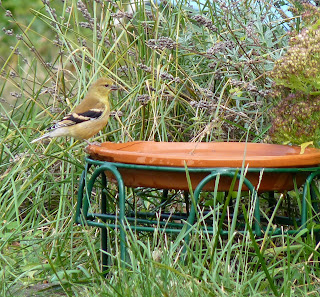 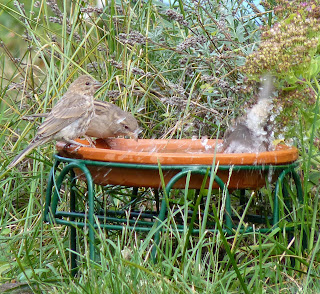 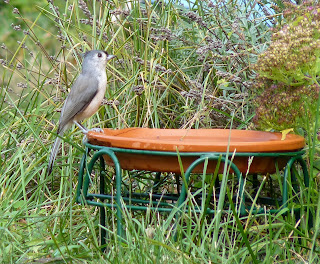 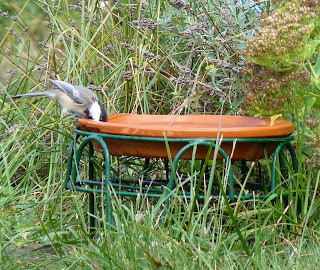 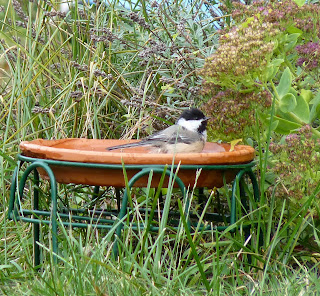 I put out a large, leaf-shaped buffet dish (w/3 section,) for water this past summer, when it was getting really hot & dry. It's been great watching everyone getting drinks. I had to laugh the other day when a big ol' blue jay tried to have a bath. The dish is only an inch deep, at most!

I just got a new one this summer. It looks metal but is plastic. My husband had to glue it to a tile because it was so light it tipped over all the time. Then the really hot weather hit - and it melted a little more each day! Bad investment.

Lana-It's funny how little it takes to attract birds-something as simple as a buffet dish probably worked as well as some expensive bird baths.

Susan W.-I made the same mistake with one from a discount store-same deal-looked like metal-mine tipped over and when I tried to stake the base down the plastic cracked-I threw it out after a month.

I had to laugh at the commentary on the video clip. I don't think your bird cares two hoots about the game :-). My backyard birds bring me the most enjoyment of any birds I see.

Cool birdbath. To me it looks a lot more authentic that the cheapo plastic ones and will have a longer shelf life and the concret one that always crack.

Wow excellent Larry... I guess the bird do actually love when we do not care about our garden because then it is more natural ;-) Beautiful post mate...

Ruth-I beg to differ Ruth because have studied the reaction of the birds in my yard. When the Patriots score the birds are lively and excited-when the opposing team scores the birds become lethargic.

troutbirder-If this one breaks it won't take much to replace it.

Chris-It odes seem to work that way to some extent-although choosing certain plants does help.

Our birdbath is a winner for all the wildlife. Even the squirrels will scamper up or jump up to get a drink. We even have water bowls on the ground but some prefer the large birdbath.

I like the way your garden grows and it is apparent the birds do too.

You have a great mix of guests. I don't know if you put the birdbath out in winter but it is a big attraction then. You can get small heaters that keep them ice free.

Wow, not bad at all for a makeshift birdbath! You could sell those!

Abe-It sounds like a regular water park for the birds over your way.I may add a few more birdbaths myself.

Harold-I have a heater that I used on the bigger birdbath but swill have to get a bigger dish to use it I think.

dawn-If only I had the barbecue going I would be all set.