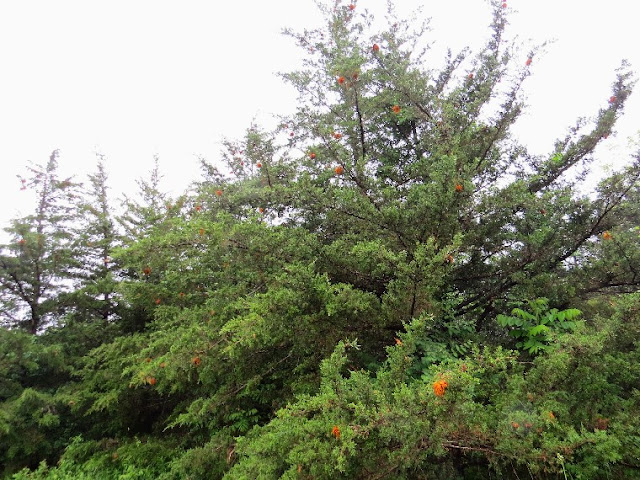 I snuck out to a small nature preserve early one rainy morning .I wondered what are these orange things in the cedar trees? 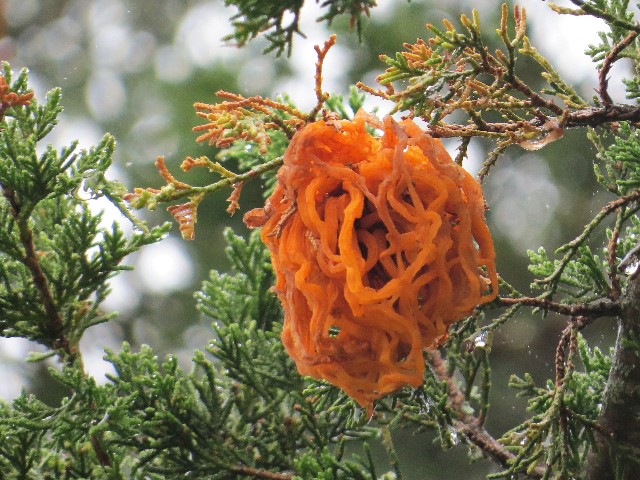 A closer inspection showed me that his must be some sort of orange spaghetti fungus? I don't know what it is but I plan to search for an answer after I post this. My biggest excitement of the morning. This is a bird I've only encountered a few times and only once before away from the shore. The first time I saw one it had me baffled because the call sounded like some sort of flycatcher to me but it is in fact, a White-eyed Vireo. In this grainy photo you can still see the white eye ring, some yellow on the sides/around the face, and wing bars.

Things have slowed nearly to a halt as far as new inland species for me to see so this was a great addition. I'm still waiting on a few such as green heron but I will turn my attention to the shoreline next.

update: The fungus is called Cedar-apple rust. It doesn't harm the cedar trees but can cause deformed fruit on fruit trees.

Great post and some really nice images - I actually just revived my own nature blog - www.newenglanfnaturenotes.bloogspot.com - and realized I had never thanked you for your thoughtful comments. Happy birding and botanizing !

Awesome! When I worked at the Power Plant, we saw this rust and I was so curious about it so I did some research. Odd looking isn't it?

I've been enjoying all of the birds around our place. Everything's so bushy and green, it is hard to spot any of them!