Where should we go to look for birds on this hot, humid summer morning? Maybe we should take a ride down to the shore. On second thought, that would take too much time. Let's just take a short walk at Machimoudus Park in East Haddam. We'll park over here.
The birds seem awfully quiet this morning-don't you think? I don't see the Orchard Orioles that were here the last time I came. I wonder if they're gone for the season? We'll walk up the main trail to the Salmon River Cove overlook. Look over there-to the right.There's an male Indigo Bunting in that bush right in the middle of the sandpit. Isn't the color beautiful with the sun reflecting off of it like that? All right, let's head up to the top of the hill. Wait a minute. Look at that brightly colored mushroom.-That thing looks like it would be poisonous! I'm going to see if I can get a picture of it. At least I know it won't move. 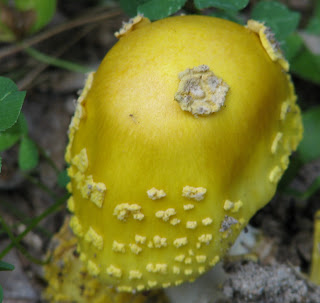 I don't even have a mushroom book. Do you have any idea what kind it is? I hear an Eastern Wood-Pewee in that big Oak Tree over there. Let's see if we can get a little closer. Look, it's sitting right out there on a branch. That's odd, I think it's another bird making the pee-a-wee sound. Now I don't know if this one is the same species. That's all we need-ventriloquist Flycatchers. I'll take a picture of it. 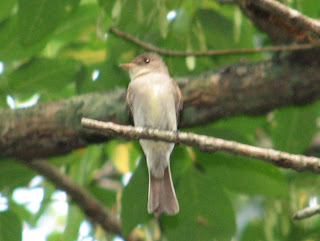 Rats!-It came out blurry. That's o.k., I'm putting it in anyway.
Have you ever checked out any of the Internet birding forums? There's actually quite a few. Anyway, I was following an interesting exchange between birders in one particular state last week. There were a few reports from birders talking about how the shore birding on the western shoreline was really picking up. A couple of the people who sent in reports posed the question: Where are all the birders? Some of the other birders who read the forum took offense to this question. They made the point that not everyone lives near the western shoreline and has the extra money for gas to drive over that way. They also pointed out that not all birders have the free time on their hands to go birding as much as they like, and in some cases don't even own a scope needed to bird these areas. The people who originally posted the question explained that they meant no offense.They just wanted to encourage more birders to get out in the field as to increase the chances of finding rarities.That brought on another discussion about bird observation versus chasing rarities. Some people may be put off by reading these types of heated exchanges-I rather enjoyed it. In these days of political correctness it seems that people are too often expected to keep their opinions to themselves. I wish that we could have more open conversations about our differences as a society.

Reading these exchanges made me realize that the birding community is made up of people from all different social classes. I've been birding with doctors, dentists, teachers, construction workers -rich-unemployed-you name it. I probably never would have met any of these people if we hadn't shared an interest in birds.

I've got to be honest, the heats really getting to me. Let's just head back down the hill and call it a day. Is that o.k. with you? Be careful!-this part is a little steep. We don't have much farther to go now.

Hey! Check out that little butterfly-We've got to get a picture of that before we go! 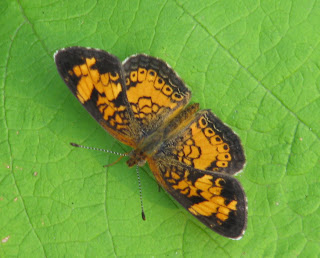 I think that's one of those Pearl Crescent Butterflies-what do you think? Well it's been fun. Maybe we'll do a little birding again in the fall when the weather is nicer and there's more birds around.-Thanks-have a nice weekend!
Posted by Larry at 3:21:00 PM

That mushroom looks crazy! I don't know what kind it is, but I do know that the same kind can vary in color and size greatly.
Following internet forums can be overwhelming, but so interesting. You can really find out a lot- about birding, birds, and the birders themselves.
Stay cool!

Hi Larry,
I guess I don't even know what an internet forum is.... I'm spending way too much time blogging and enjoying other people's blogs, so I don't think my internet birding experience will ever go much beyond that.

Veery-I've come across quite a few strange looking mushrooms lately.
Ruth-Internet forums are basically like chat rooms where discussions on particular topics take place-there are several dedicated to birding.

I stick to listserves over forums but the stuff on the listserves can get pretty heated too...especially when birding ethics comes into the equation.
That mushroom is cool and the butterfly looks Pearl Crescent-ish to me but I'm one of the last people who should be id'ing butterflies!

I think the fungus is an aberrant Amanita muscaria var. formosa. The white 'warts' are a remnant of the universal veil. Have you ever scuffed up a mushroom to find it has a cup at the base. That's Amanita.

Thanks for taking us along on your walk! Beautiful photos. Any ID on the flycatcher yet? Was it saying "pee-a-wee"? I love flycatchers; so delicate and aerobatic.

Cathy-I have scuffed a mushroom with a cup at the base now that you mention it.
dzugman-I think it was the pewee-he wasn't talking but his nearby buddy was.