Camping Out At Pachaug Forest 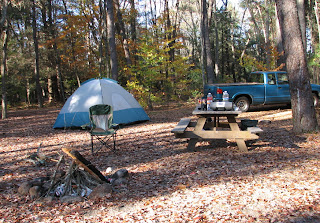 Over the years, Fall has been my favorite time to go camping. There are only three state campgrounds that stay open past mid October. I chose Mount Misery Campground in Voluntown, CT because it offers something that the others don't: solitude. It would have been nice if my wife, Joan, came with me. The idea of sleeping in a tent with overnight temperatures in the 20's didn't appeal to her, although she did a great job recording The Red Sox winning The World Series-GO SOX!

Camping holds a special appeal to me. Spending time in a secluded forest tends to clear your mind from things that would normally distract you and helps you reconnect with nature. I prefer not to over prepare for a camping trip. Being without some of the modern conveniences that we have become so dependent upon forces you to rely on your own ingenuity to solve basic problems. For example, I discovered after my first night's stay that the ground was a little bit harder than I had anticipated. The next day, I stuffed leaves and fallen soft pine needles under the tent. It worked like a charm. Can you believe that I forgot to pack eating utensils? Not a problem. The ready to eat tuna & cracker snack pack I brought came with a spoon. Of course, it was small enough for a mouse to use. Well, they always say you should take your time eating meals-and I certainly did! 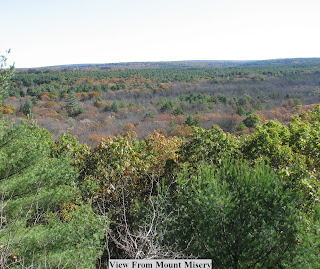 On the day of my arrival, I followed a trail that took me to the top of Mount Misery. The view doesn't seem to fit the name. I believe that the name came from the fact that the soil in the area was so rocky that it made it very difficult for farming way back when. Old cellar holes and miles of stone walls throughout the woods is evidence that the entire forest was once a farming community. Mount Misery itself, has an elevation of only about 400 feet, so it doesn't really qualify as a mountain. It's a little steep going up but makes for a nice short hike. 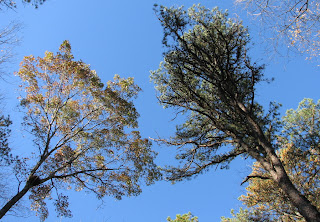 After my hike through the woods, I sat back in my chair and looked up admiring the view of the treetops set against the backdrop of a beautiful blue sky. It wasn't long after this picture was taken before darkness fell. Thousands of stars filled the night sky. Cygnus (the swan), also known as the Northern Cross, was directly overhead. 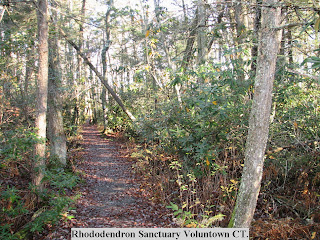 This is a trail through a 26 acre Giant Rhododendron sanctuary. It has a short, packed gravel trail followed by a raised boardwalk that leads to a deck overlooking an Atlantic White Cedar Swamp. They say that visiting this site in late June or early July offers a breathtaking view of the blooming flowers. 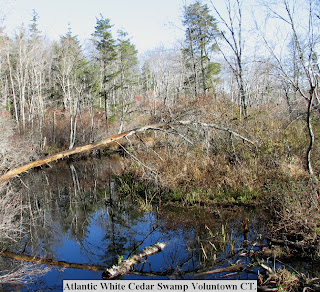 Here is the beginning of the swamp located just beyond the Rhododendrons. Another nice feature of this whole area is that it's wheelchair accessible. 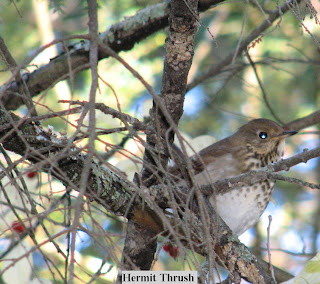 The first birds that I saw along the trail were two Hermit Thrushes. They can be found in Connecticut sporadically throughout the winter. Another sighting was that of a juvenile Yellow-bellied Sapsucker. I thought it was a male because it was starting to show red on the top of its head. Later, after consulting my field guide, I realized that both male and female show some red on the crown. The next time I see a juvenile sapsucker, I'll have to study it a little more carefully. A Hairy Woodpecker was within twenty feet of the sapsucker. It was interesting to compare the size and features of the two species. I had another interesting experience here. Early in the morning, I heard a small flock of birds singing a distinct but unfamiliar song. It was a fairly short song but filled with many rapid notes. The birds were picking at pine cones at the top of some very tall coniferous trees. The view was too distant to make out any details and flew off after a few moments. I suspect that they may have been some sort of winter finch. I went back later, with a scope hoping to get a better look, but there was no sign of them. I feel as though I missed a good opportunity to see a new species. Oh well, that's the breaks! 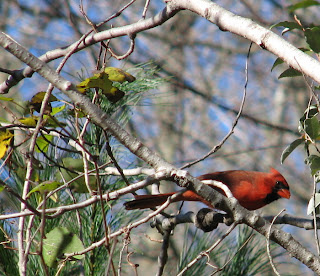 Some of the other birds I saw during my stay included: Northern Cardinal, Eastern Bluebirds, Golden-crowned Kinglets, Ruby-crowned Kinglets, Yellow-rumped Warblers, White-throated Sparrows, 5 Brown Creepers, and 6 Red-breasted Nuthatches. The most numerous species of birds were American Robins and Dark-eyed Juncos. I saw hundreds of each. Oh yeah... I almost forgot! I found 8 Rusty Blackbirds feeding on the grass in the picnic area. That was a new species for me. I had to look at them for a while before figuring out what they were. They have a pale iris but a shorter tail than a grackle. 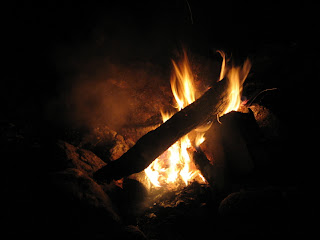 I drove down one of the many dirt roads to collect some of the fallen limbs for firewood. Some of the roads through this 24,000 acre forest seem to go on forever. It amazed me that there were picnic tables miles out in the middle of nowhere. The woods had a dark and eerie feel to them. I can see how the ghostly legends surrounding Pachaug Forest got started. Your imagination can get the best of you when you're all alone in the woods.

I sat by the fire on the eve before my departure. I could hear the strange, but wonderful, vocalizations of the Barred Owl echoing through the night. The fire was slowly dwindling down and I had used up the last of the firewood. I played a few bars on my harmonica as I listened to the final words of a Dylan song: Strike another match, go start anew -And it's all over now, Baby Blue...

I got Rusty Blackbird this weekend in Cape May - they don't look like much, do they? Probably one of my least exciting lifers.

Hi Larry,
That's the thing I like about camping in the fall too....that there aren't many other people around and you can have the parks and trails almost all to yourself. I'm glad you got to see so many good birds.

I wish I were so brave and adventurous Larry. The solitude is appealing however. Great list of birds you viewed! I can just hear your harmonica in the dark...

Larry,
Sounds like a wonderful time! Though I must admit that like Joan, the idea of sleeping in a tent doesn't do much for me any more.Give me a cabin, even a rustic one. Congrats on the Rusties! They are a great bird!
Vern

I love the area and the idea of solitude is appealing. However, I prefer walls and a bed as Joan does.

Laura-It's true about the rusties not being a bit bland.-I was expecting them to be a bit more distinguished looking.-Still a new species though!

ruthiej-Yes-I am a big fan of doing things off season.

Vern-thanks about the Rusties-I don't mind a cabin myself, but you can go camping at the spur of the moment without spending any money.


ruth-I understand that roughing it is not for everyone.

Congrats on the Rusty Blackbird!

I found my first one two summers ago near Fryeburg, Maine.

I am another that's prefers a cabin to a tent, guess it my age catching up with me.

welcome back - I was wondering when you would return! love all the pictures and great birds you listed for sure! Happy Halloween!

It's been soooo many years since I've camped. You brought back some very good memories.

Have you heard about Comet Holmes? I finally got out to see it last night. It's really quite special through 10X binoculars. Go to space.com

It sounds like a great trip. The way you describe the solitude makes me want to go and sit by a fire with a cup of tea until I'm tingling with the anticipation of wrapping myself in a warm sleeping bag. Thanks for taking us along.

Larry,
You make us hungry! Not for tuna from a can, but for hiking! Sounds like a lovely trip.
Lisa and Warren

Thanks for sharing, Larry. It sounds like you had a great time. I like camping in autumn as well, but here the chances of rain are more risk than I'm willing to take. There's nothing worse than a wet tent! I wish we had such colorful birds as cardinals here..

It takes a true birder to go camping during the World Series when it is your favorite team playing!

John-It's probably catching up with me to. I'm just not willing to knowledge it.

Warren & Lisa-It was actually something on your blog that spurred me to do some more hiking.

Patrice-I definitely don't go if rain is in the forecast.

birdfreak team-Not that dedicated-I still listened to it on the radio and then watched the replay on video!

Cathy-I've been waiting to see this comet.-It's been cloudy ever since I found out aboutit.

mjoman-I remember that you did some solo camping not too long ago.-At least I didn't have to worry much about ticks.

I've been away from your site too long!

First, I agree with your wife. "Roughing it" in 20 degrees is too much. However, the way you described your adventure is very tempting - just for ONE NIGHT.

We all need a vacation alone. I'm all for it!

Larry, I'm new to your Blog but not to Mt. Misery or Pachaug State Forest. My husband and I used to picnic there when we were newlyweds 30 years ago. I live in the Tucson area now but reading your Blog reminds me of where I grew up. I can peek back into a world I left behind many years ago. Nice writing!

Kathie-Sounds like nice memories! I'll bet Pachaug hasn't changed much in 30 years. I first went there about 20 years ago and it's just as I remembered it.Thanks for visiting my blog.