The Results Of The Portland Field Trip 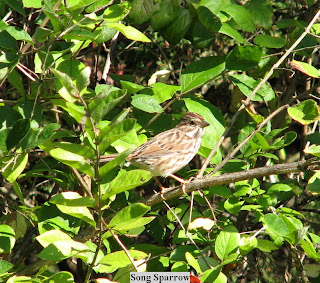 Here is a summary of the Portland Field trip that I led on Sunday for The Hartford Audubon:

A total of 8 birders met at 7:30am on Sunday for the Portland field trip. It was an unseasonably warm morning.The clouds stayed with us throughout the trip, but fortunately the rain held off. We started our day at Wangunk Meadows, which we entered via The Portland fairgrounds. We had just started to scan a tall weedy area, when-surprise!-we spotted an adult White-crowned Sparrow. We had a nice view of this bird form two different angles. Other Sparrows seen were White-throated, Song, and some of us very nice views of Swamp Sparrow.There were a few sparrows of whose identity we were uncertain of. The tall, overgrown weeds made it a challenge at times. 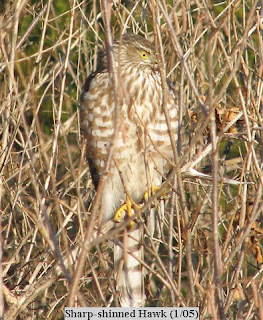 There were quite a few raptors in the area as well. We had impressive views of Coopers Hawks, Sharp-shinned Hawks, and a Peregrine Falcon which all flew over at low altitudes, making them easy to see. Fran D. provided some helpful identification tips throughout the trip, particularly for sparrows and hawks.

There was one particular tall tree that was well stocked with birds. White-breasted Nuthatch , Red-breasted Nuthatch, and Yellow-rumped Warbler were among those that we were able to identify.
There were good numbers of Red-winged Blackbirds seen throughout the trip; both on the ground, and flying overhead. We were able to hear the harsh croaking of a Common Raven in the distance. The American Crows seemed to have their wings full all morning chasing Ravens and raptors. They were constantly squawking.
The highlight of the trip may have come from a bird that is quite common, the Black-capped Chickadee. Seeing a chickadee is always a delightful experience. On this morning we saw flocks of 30 at a time flying from tree to tree. All together, there may have been as many as 100 Black-capped Chickadees seen within one area. This was an awesome sight, that none of us had ever experienced before!
On the way out, Beth N. spotted a Yellow-bellied Sapsucker in a distant tree. Adrian was able to get it in the scope, where the long white stripe on the folded wings could clearly be seen. Beth seems to have a knack for spotting birds that others overlook.
We also made brief stops at some local power lines, a cranberry bog, The Brownstone Quarries, and the Portland Transfer Station (dump). We picked up a few more birds at these locations, but it served more as a small tour of the town.
The total number of species seen or heard was 48. Other species of note included: Double-crested Cormorant, Great Blue Heron,Turkey Vulture, Red-tailed Hawks, Red-bellied Woodpecker, Downy Woodpecker, Northern Flicker, Eastern Phoebe, Blue Jay,Tree Swallows,Tufted Titmice, Carolina Wren, , Eastern Bluebirds, , Gray Catbird, Northern Mockingbird, Cedar Waxwings, Eastern Towhee, Northern Cardinal, Indigo Bunting, Brown-headed Cowbird, Purple Finch, Golden-crowned Kinglet, American Goldfinches, and Bobolinks.
We stopped at Dunkin Donuts to compile our list-this seems to be something that cops and birders have in common. Although the turnout was small, I think we were all pleased with the trip. A small group allowed us to move along at a nice pace, and we all worked well together as a team.
This was the second year that I've done this trip. Although the area is definitely not known as a hot spot, the birding was pretty good on this particular day. I don't really like playing the role of the leader. I did enjoy sharing a new area with others though. I think that I was able to move the trip along at a better pace than I did last year. I was a little bit nervous during the trip, but was relieved that it went fairly well. Hopefully by next year I can improve on a few things such as my identification skills and ability to describe to others where a particular bird is located. We saw birds of prey today, but definitely no birders of prey!
Posted by Larry at 1:31:00 PM

woo-hoo, a good day for you Larry!

I'm glad you had a good group of birders and saw so many great birds. I would love to see a huge flock of chickadees...were they all chattering with each other too? Must have been amazing!

Kudos to you for having the courage to lead a trip! Why not ask someone to *co-lead* so you'll feel less pressure to perform?

I think the hardest thing would be not finding any birds around. Your list is great - especially like the stop at Dunkin Donuts at the end!

One good way to point out the location of a bird is to compare the tree or bush to a clock and say the bird as at 3 o'clock or whatever. It also helps to be able to id the type of tree or bush also!

Wow, 48 birds! I doubt that anyone complained about the leader. I don't think I would feel intimidated in your group.

Way to go Larry! I expect you'd be terrific leading a birding group. With your way of being encouraging- you're a great leader.

Great list of birds that you found and you captured some goodies for sure! keep up the great work!

ruthiej-Seeing that many Chickadees together was the coolest thing!

Laura-I know what you're supposed to do with the clock method.My problem can often be describing which tree or bush.Some times I can give a good description, but I get a bit of brain freeze at other times.-Yes I do feel pressure about having birds appear, even though I have little control over that.

Lynne-I'd probably be best off leading people new to birding.

Hey Larry - you can be my birding leader anytime! Sounds like you did a great job - and the birders who accompanied you certainly helped. That's a great list.

Maryc-Yes-the other birders helped me out a lot

Larry, I give you a lot of credit for leading the trip. I'm sure everyone enjoyed your knowledge and skill. I, for one, would love to join you!

You said, "Although the area is definitely not known as a hot spot..." How can you say that when the lists of birds you saw is amazing long? LOL!

Mary-Luck was with me that lots of birds were around.-It can be a good spot, but it's like a box of chocolates as FG would say.
Also,Good birders found some birds that would have slipped pat me if I wasn't there.

I am sure you were a wonderful guide Larry. What a great list of birds you all spotted that day!