A Drive Down Country Lane 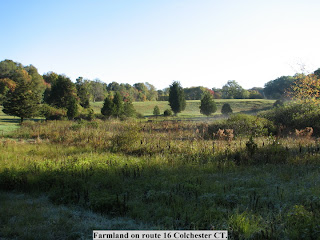 On Sunday morning I hopped in my truck armed with my binoculars and camera ready to go. There was only one problem, I really wasn't sure where I was going. I just started driving, finally deciding to head towards the Lebanon/Franklin area. This is one of the more rural areas in the state.

My first stop along the way, was some farmland along Route 16. I've seen deer and Wild Turkey in the field numerous times over the years, and wondered if it would be a good birding spot. I pulled up my truck along the side of the road, and looked for an entrance. There was an open gate in the corner, and I no sign of trespassing signs-so in I went.

I spotted two areas that I wanted to concentrate on. The first was an area of overgrown weeds near a marshy area. There were a fair amount of birds here, mostly Song Sparrows. I also spotted a Blue-headed Vireo , which have recently been reported moving throughout the state. 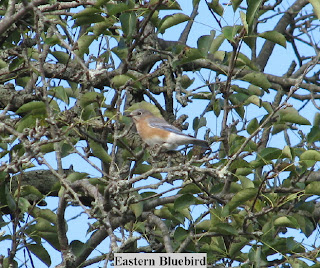 I quickly moved on to the second area, which was a big old tree standing smack dab in the middle of the field. There were about 20+ Eastern Bluebirds flying back and forth from the tree to the grassy area beneath it. It seemed to me Bluebird populations decreased in our area over the last year (not very scientific). Finding all these Bluebirds was an encouraging sign. Not surprisingly, there was a pair of Red-tailed Hawks patrolling the field. I could hear the tiny ringing sound of kinglets in the woods at the edge of the field. 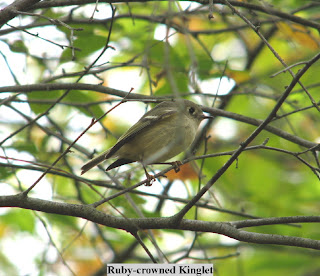 I only spent about 20 minutes in this field and then headed back out on the road again. Thanks to the owners, whoever they are.

I started to drive along Route 207. There are plenty of undeveloped areas and farm fields in this part of the state, so finding suitable bird habitat should be easy-right? Only it didn't work that way. Many of these fields were lacking the food and water that birds find appealing. I ended up wasting gas because I couldn't find the type of habitat I was looking for. Being in a rural area doesn't guarantee that everywhere you stop will be haven for birds. You still have to find good habitat, and there are other factors that come in to play as well. In some ways, this can be easier to find in a more populated area, since there is less ground to cover. Looking at a map, I noticed that I was fairly close to The Franklin Swamp Wildlife Management Area. This is a place that I was always curious about. As an added bonus, it was Sunday, so my chances of being shot at would be greatly reduced. 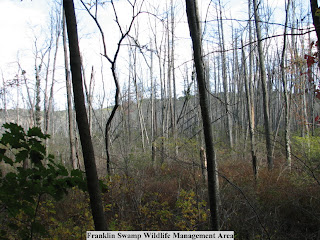 By the time I reached The Wildlife Management Area, my level of enthusiasm had diminished just a little. I'm always fascinated by swamp habitat and I enjoyed getting a view of the area. There was a burst of bird activity just as I neared the swamp area that included: White-throated Sparrows,Black-capped Chickadees,Ruby-crowned Kinglets, Woodpeckers-(RB,NF,Hairy& Downy),and an Eastern Towhee. I took a quick tour around the swamp, but the rest of the area was not as productive.

The fall ride through the country was a visual treat, even though I didn't find the hot spot I was hoping for.
Here is a little assignment for those of you who are interested:
1) Find a small area that looks as though it would be good bird habitat.
2) Make sure it is an area that is not a known birding area and you have not visited before.
3) Record all bird species and interesting behavior that you observe in a 20 minute period.

Hey, Larry! My kind of birding expedition...spontaneous and unpredictable. I think many of our birds have gone south in the past week. I stopped in a bush/swampy area today and heard and saw very few birds. Good project though.

Hi Larry,
I'm seeing lots of birds right now as I head to the deer hunting stand. They tend to congregate at the forest edges on the edge of the cornfield. Standing still & all dressed in camouflage has given me some great views of these birds. I always tell myself that I'll go back there in spring during warbler migration and I have yet to make the effort. Something to put on my list for next spring again.

ruth-I'll bet you thought that you would see something good-it's that search for the hidden treasure.

ruthiej-It seems that would be a good way to see birds without spooking them.

OK, so that means I have to venture outside my back yard, right? (grin) Heck, I can do anything for 20 minutes...lolol. Mary? Wanna come?

Jayne, I'd see a lot more in your backyard than mine! LOL!

I can do that, Larry. I can spare 20 minutes, but if I find a real hot spot, 20 minutes would turn into hours! Just get in the car and go - sounds great.

Hi Larry, I know what you mean about trying to find a good habitat "out in the country." I can't tell you how many times I've pulled over at some spot, thinking it would be good, and then I get no birds or maybe a noisy bluejay. I'll definitely try your exercise, though! Come on, weekend! Hurry up!

Jayne & Mary-I'll be looking forward to your findings!I chose 20 minutes because I figured that was a period of time most people could spare.

dzugman-It happens to me often, but I'm always optimistic that I'm going to discover a new mini hot spot.

I came back and laughed at your second line. That would be me.

I love spontaneous birding... another fun thing to do is look at Google Earth first and find areas that are heavily forested or along rivers or creeks and just go there and check them out. Even if you can't get in, if they are along backroads they still over some nice birding.

Larry - nice pictures of the Bluebird and Kinglet! Sounds like a fun day. We are going to take you up on your "assigment" this week ... In fact, we have an area near us in mind.

Mary-I didn't want to say anything, but I had you in mind when I wrote that.

Birdfreak-I've never heard of google earth, but that is exactly the type of stuff I like to do.-Thanks for the tip!

Looks like a fun project for sure! Hmm, will have to try this!

What a great assignment. Now if only I can convince my family.