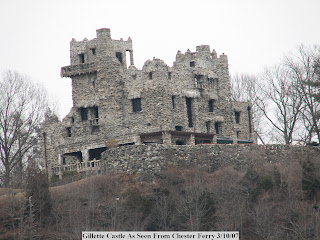 East-Haddam is home to one of the most scenic stretches of The Connecticut River. The town has a nice mix of history and natural beauty.

Show here is Gillette Castle in East Haddam CT. as seen from the opposite side of The Connecticut River in Chester.

This castle was home to William Gillette. He was a famous stage actor in the 1800's. He was most known as the the actor who brought Sir Conan Doyle's character Sherlock Holmes to the stage. He added many details to the character such as the pipe and hat that many people have come to associate with the character of Sherlock Holmes.

Gillette never referred to the home as a castle even though it was designed after the ruins of a medieval German fortress. The castle stands 200 feet above the CT. River on a ledge. It is 14000 square feet with 24 rooms. The Walls are made of solid native granite and are five feet thick at the base. There are many secret passageways. Gillette also built his own miniature working railroad so he could entertain his guest by giving them rides around the property. One of his most famous friends was Mark Twain.

Today the whole area is a park with plenty of acreage. It contains trails and picnic areas. It's also a good place to find a nice variety of birds throughout the year. If you are ever in the area, it is well worth checking it out.
Posted by Larry at 4:29:00 PM