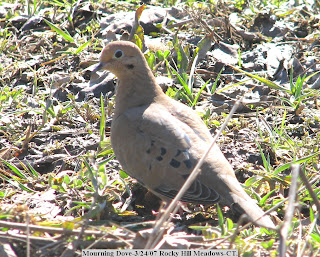 Some facts about Mourning Doves:

I have no problem with mourning doves. They are much more well-behaved than pigeons at my feeders.

I've noticed a couple of things about doves in the backyard. One thing is that they like to sit on the edge of the birdbath without drinking or bathing. Another is that they seems to wink a lot during mating season. I think this may be tied in with courtship.

I'll have to pay attention that winking.

I have quite a few around my yard, especially now when they like to sit under the Rose of Sharon hedge and bask in the afternoon sun.

I like the Rose of Sharon Hedges because they attract Humminbirds.

The Mourning Doves are great birds and I agree they are some of the good guys at the feeder. Great blog you have here! I am adding you to my RSS feed!

I enjoy hearing the mourning doves when I awaken in the morning and enjoy watching them, even though they are so common. Interesting info.
Ruth

I'm glad to hear there are folks out there that don't hate mourning doves! They seem sweet and gentle and I really love their calls.

Winking? Are you joking about that?

Wasn't joking about the winking/blinking.-It turns out that this is-part of the courtship:
"As courtship progresses, the nest call is accompanied by a gentle flipping of the wings over the back, opling eyes: mutual winking or blinking, and seductive turning and nodding of the head."

Your quoted description of dove courtship sounds like behavior I've seen in a bar! (although it's been about a hundred years since I've been in a bar...)

Where I live people wanted to pass a bill that would legalize hunting of these pretty birds. What a waste if it had passed. I love the mourning doves.

Lynne-I can see the comparison.
Tina-sounds like it didn't pass which is good news.