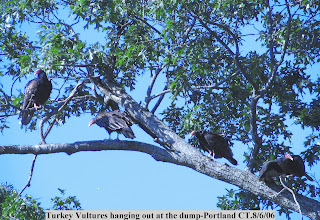 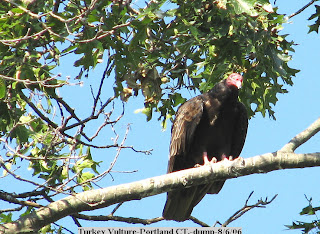 Having been out on a few birdwatching field trips, I've noticed that not a lot of people seem to be very enthusiastic over Turkey Vultures. You hear comments like-"oh-it's just another Turkey Vulture" or 'They've got a face not even a mother could love" etc. Well -Turkey Vultures are mad as heck and they're not going to take it any more!

I learned a lot about TURKEY VULTURES today thanks to some very interesting information from The Turkey Vulture Society. Turkey Vultures, or T.V.'s as some birders like to call them , are a more complex bird than I had realized. I knew that they like to hang out in dumps and that they take advantage of thermals to glide around for long periods of time. I also heard that they vomit from their noses when frightened.

Some people might confuse Turkey Vultures with immature Bald Eagles when see flying in the distance. Both are dark and have large wingspans . The Turkey Vulture, however, has it's wings tipped upward in a dihedral (v-shape). They also rock slightly from side to side when gliding. Bald Eagles glide with their wings basically flat -(no dihedral) and do not rock.

Someone once told me that Turkey Vultures were imported in to Connecticut from Texas to help clean up road kill. I think they were putting me on. What actually happened was that their range expanded northward to the point that they have become common . Prior to the 1920's they were rarely seen in Connecticut. There aren't as many seen in the winter because some of them migrate south as far as South America. Manchester Landfill , The Portland Transfer Station, and Cromwell Meadows are three good places to view them in Connecticut.


Learn more interesting facts at The Turkey Vulture Society Website -at:http://vulturesociety.homestead.com/TVFacts.html. They have a lot of interesting information about them.

Hi Larry, just dropping by to say "hello". Thanks for checking out my blog. I love the turkey vulture. They're one of the few birds that my g/f can ID in flight.

Thanks for the great turkey vulture tutorial! They are one of my favorites. Believe it or not, I find their red heads, big eyes and pearly-white beaks to be quite pretty!