Along The CT. River In East Haddam, Connecticut 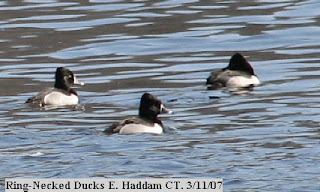 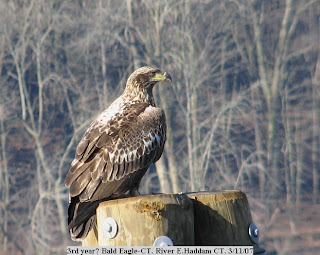 There are a good number of Ducks and Eagles to see at The Salmon River Boat Launch in East Haddam CT. this time of year. This is where the Salmon River empties in to the CT. River.
My wife, Joan, was very impressed with what she saw today. She spotted several eagles before I did and is starting to become a bit of a birder herself. She especially enjoyed seeing the Wood-Ducks.
It seems ironic to me that after all the effort has been made to help increase the Bald Eagle population, some people are worried that the Eagles have come back too much. Over the past two days I've heard from one avid birder who is concerned that the Gulls have diminished in an area that used to be loaded with them . He has witnessed Eagles feeding on gulls in that area on several occasions. I heard similar complaints from another birder concerning ducks.
Posted by Larry at 6:04:00 PM

Beautiful eagle picture- it looks frosty! Glad you had a good day birding with your wife.